US flags fall as Fetterman launches his campaign speech 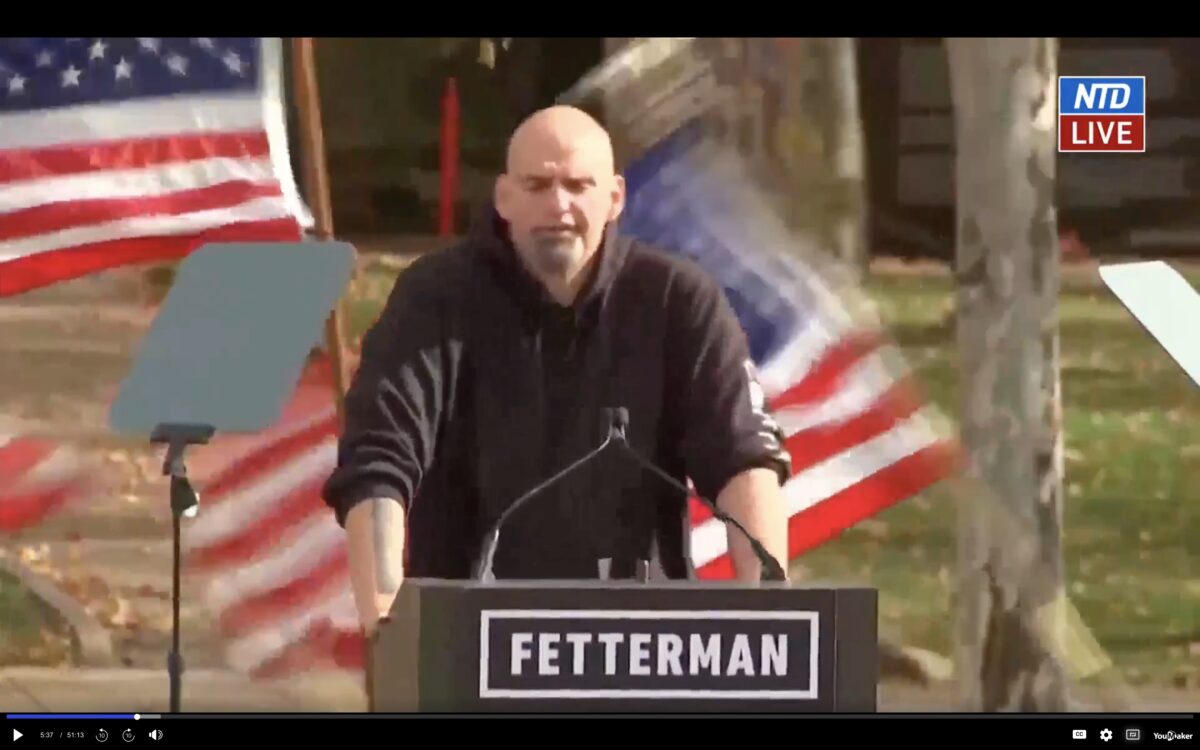 US Senate candidate John Fetterman, a Democrat, got off to a strange start to a rally Saturday in Pennsylvania when a sudden gust of wind blew through the row of US flags behind him during his opening speech.

As soon as the lieutenant governor took the stage in Pittsburgh on Saturday morning, he downplayed the appearance of his Republican opponent Dr. Mehmet Oz and former President Donald Trump, who would later gather with supporters in Latrobe the same day.

No sooner had he finished saying this than a strong gust of wind toppled at least five American flags lined up behind the stage. It is unclear if Fetterman noticed the oddly timed weather incident.

Staff quickly restored the flags, but the video clip went viral on social media as responses varied across partisan divisions. Many took to Twitter to taunt him about the incident, while others saw it as a harbinger of Democrats’ fading prospects for Tuesday’s election.

Republican National Committee Chair Ronna McDaniel called it “a perfect metaphor for Democratic control of Congress.” A clip shared by the committee has been viewed more than 3 million times.

The focus on Pennsylvania highlights the stakes in 2022 and beyond for this highly contested state. As Oz and Fetterman vie to replace retired Republican Senator Pat Toomey, the race could decide the majority in the Senate and with it whether the Biden administration can carry out its agenda and judicial appointments for the next two years .

Last summer, Fetterman held a double-digit lead over his rival in several polls, but the race has narrowed considerably in recent months, particularly after the only scheduled debate between the candidates last month. Fetterman struggled to speak in full sentences, stumbled over his words and delivered responses punctuated by extended pauses in interviews after suffering a stroke in May. During the debate, he had to use a teleprompter to read the words spoken to him by his opponent and the moderators to help his understanding.

In a recent poll of likely voters conducted by The Hill and Emerson College Polling, Oz leads Fetterman, 48% to 46%. A New York Times/Sienna poll released Nov. 1 showed Oz and Fetterman tied at 47 percent.

“Among those who say they have heard, seen or read a lot about the debate, Oz leads Fetterman 55% to 41%,” Spencer Kimball, executive director of Emerson College polls, told The Hill.

Fetterman showed little trouble speaking on Saturday, and some praised his lack of response to the incident. “High winds are blowing flags away, but strong Democrat candidate doesn’t even flinch,” someone wrote on Twitter, praising the candidate as “strength personified.”

Fetterman’s campaign team did not immediately respond to a request for comment.

The key pivotal state saw a clash of titans on Saturday as the biggest stars from left and right worked to energize voters in the final days of voting in the midterm elections.

After the morning rally, Obama also teamed up with his former No. 2, President Joe Biden, in Philadelphia for a final before the Nov. 8 election. The former president toured key states campaigning for Democratic candidates in tight races amid political headwinds for the party.

Rita Li is a reporter for The Epoch Times, focusing on US and China-related topics. She started writing for the Chinese language edition in 2018.