Ukrainian news – live: Russia has lost a third of its ground troops since the war, according to the Ministry of Defense 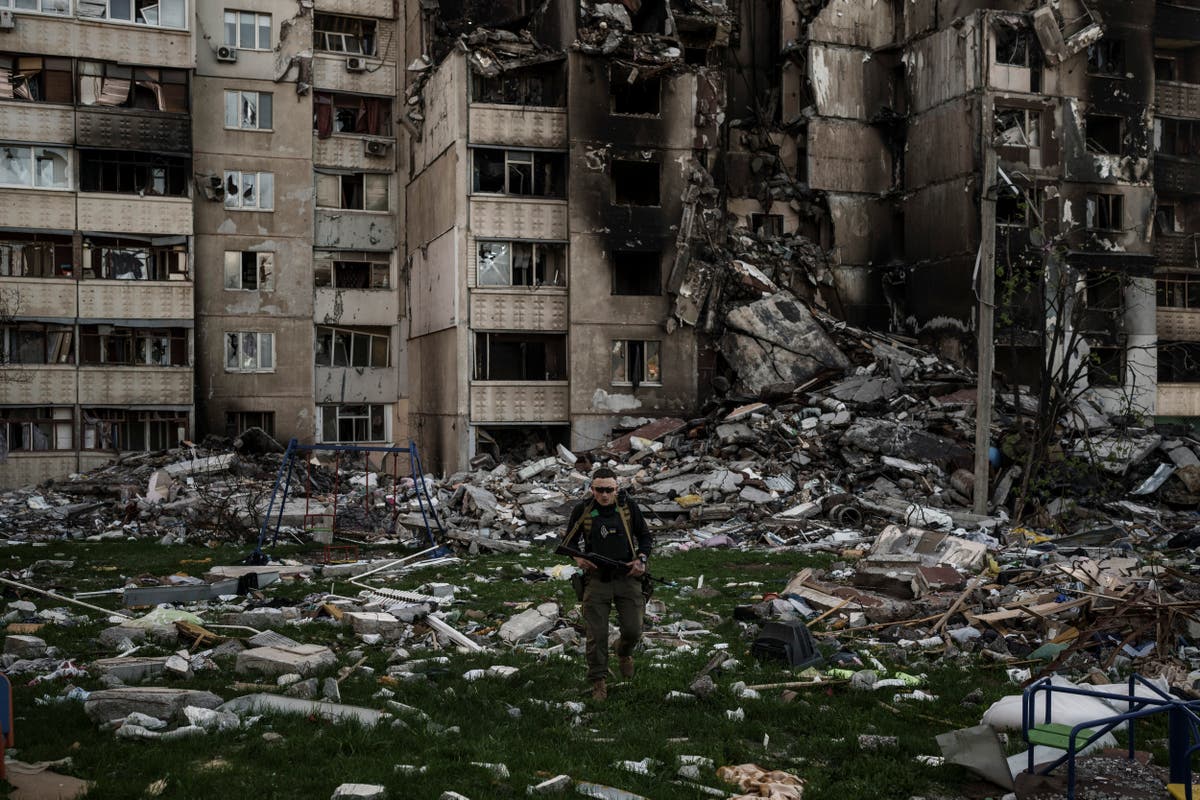 Russia has likely lost a third of its ground troops since the war in Ukraine, the Defense Ministry said in its intelligence update on Sunday.

He added that the Kremlin’s offensive in Ukraine’s Donbass region “lost momentum and fell far behind.”

“Under current conditions, Russia is unlikely to significantly accelerate its pace of advance over the next 30 days,” the update said, blaming the failures on a critical loss of equipment and intelligence as well as low morale and reduced combat effectiveness.

British intelligence has predicted that due to these issues, Russia is unlikely to significantly accelerate its pace of advance over the next 30 days.

It comes as President Zelensky said Russian troops were pulling out of Kharkiv, the country’s second-largest city, after shelling it for weeks. Ukraine’s military says Russian forces are now withdrawing from the northeastern town to focus on protecting supply routes

“The object is completely destroyed,” Kozitsky said in a message on the Telegram messaging app.

Earlier, a Ukrainian regional air command said several missiles were fired at the Lviv region from the Black Sea in the early hours of Sunday morning.

Fresh off his country’s Eurovision win, a defiant Ukrainian president, Volodymyr Zelensky, pledged on Sunday morning to one day hold the song contest in the beleaguered city of Mariupol, which is almost entirely in the hands of Russians, with the exception of a loyal group of a few hundred Ukrainian fighters who continue to hold out in a steelworks.

Ukraine’s Kalush Orchestra won the popular competition with their song “Stefania,” which became a popular anthem among Ukrainians during the war, and their victory lifted their spirits.

“Our courage impresses the world, our music conquers Europe,” Zelensky said on Facebook. “Next year, Ukraine will host Eurovision!”

Discussing Ukrainian President Volodymyr Zelensky’s speech on hosting next year’s competition, Mr Kwarteng told Sky News he was “looking forward to seeing it” being held there.

When asked if the UK would support Ukraine in hosting the event, he said: “Absolutely… what we have been doing is really supporting Ukraine from the start. of this crisis and we will continue to do so.”

He added that the situation in the war in Ukraine was “encouraging” and that Russia’s war aims were clearly “completely frustrated”.

However, he warned: “We’ll just have to see how the situation develops.”

Germany has made all preparations for a speedy ratification process if Finland and Sweden decide to apply for NATO membership, Foreign Minister Annalena Baerbock said on Sunday, while stressing the need for both countries security guarantees.

“Germany has prepared everything to do a quick ratification process,” she told reporters during a second day of talks with her NATO counterparts in Berlin, adding that ministers had agreed during a dinner Saturday that there should be no gray area between when they apply and when they join.

“If they decide to join, they can join quickly… We have to make sure that we will give them security guarantees, there must not be a transition period, a gray area, where their status is not clear,” she said.

She was referring to the ratification period which can take up to a year, during which the Nordic countries will not yet be protected by NATO’s Article 5 which guarantees that an attack on one ally is an attack on all.

Italian police foiled hacker attacks by pro-Russian groups during the May 10 semi-final and Saturday final of the Eurovision Song Contest in Turin, it said on Sunday.

During voting operations and candidate performances, police said they mitigated several cyberattacks on network infrastructure by hacker group “Killnet” and its subsidiary “Legion”.

On May 11, “Killnet” claimed responsibility for an attack on the websites of several Italian institutions, including the Senate, the upper house of the Italian Parliament and the National Institute of Health (ISS), the ANSA news agency reported. .

‘Things are still not sure’: Residents fear returning to battered Kharkiv villages despite Russian withdrawal

Denis Kozmenko decided to flee his home with his young family after seeing a young mother, who had taken refuge in a school during airstrikes, being trained to be raped by a Russian soldier.

He was among many Ukrainian men who decided to move their wives and daughters out of the village of Mala Rohan, which was under Russian occupation, after the horrific sexual assault on the 27-year-old woman.

“I saw what happened that night. This poor woman was taken in front of her family, dozens of people, by this soldier. I realized then that there was no security, no security at all,” said Mr. Kozmenko, who returned to the village after it was recaptured by Ukrainian forces.

More on this from our Ukraine Defense and Security Editor, Kim Sengupta:

One person was injured when Ukrainian forces fired on a Russian village near the border, Belgorod region governor Vyacheslav Gladkov said in a message on the Telegram messaging app on Sunday.

Belgorod Region Governor Vyacheslav Gladkov made this statement on Telegram.

“The village of Sereda, Shebekinsky urban district, was removed from Ukrainian territory,” he wrote.

“The civilian was injured, received shrapnel. He will receive all necessary medical attention.”

Exclusive: Ukrainian refugees can be accommodated in guesthouses indefinitely under new laws passed quietly by the government

Ukrainian and Afghan refugees in the UK could be accommodated in guesthouses indefinitely under new laws quietly imposed by the government, prompting accusations of a ‘two-tier system’ of housing support.

On Wednesday, an amendment to homelessness laws says the six-week limit that homeless families can spend in guesthouses will no longer apply to refugees who have fled Ukraine and Afghanistan.

The changes also provide that councils can place these groups outside the area – potentially hundreds of miles away – without considering the usual factors such as disruption of employment and education and access to medical facilities or to other supports.

Our social affairs correspondent, May Bulmanhas the full story below:

The Russian offensive in Ukraine’s Donbass region “has lost momentum and is way behind schedule”, British military intelligence said on Sunday.

“Under current conditions, Russia is unlikely to significantly accelerate its pace of advance over the next 30 days,” the British military said in a regular Twitter post.

On Friday, Ukrainian forces prevented an attempt to cross a Russian river into Donbass, an eastern area including Lugansk and Donetsk regions that has been at the center of the war.

The attack was confirmed by Lviv Governor Maxim Kozitsky.

He added that there was no information on the dead or injured in the attack.

“The extent of the destruction is being clarified,” the governor said.