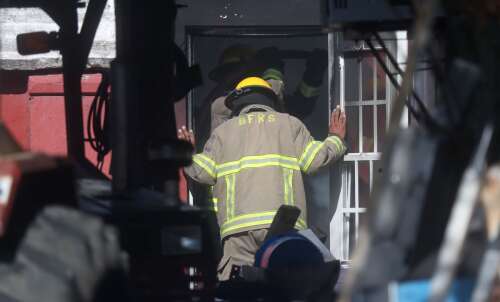 The government will launch a review of the island’s fire service to determine its suitability to fulfill its role.

The Speech from the Throne, delivered today by Tom Oppenheim, the Deputy Governor, said the government would approach Her Majesty’s Inspectorate of Constabulary and Fire and Rescue Services to carry out a review of the service. fire – the first since 2010.

The government also announced that it would amend the Fire Safety Act 2014 “to clarify that the adoption of National Fire Protection Agency codes only apply to premises within the scope of the law and not to the operation of the emergency services in the event of an air accident and fire.

The Deputy Governor added: “This will ensure that there is certainty as to appropriate minimum staffing levels and other operations for LF Wade International Airport.”

The Fire Safety Act states that the provisions of the National Fire Protection Association’s Standards and Codes of Practice “shall have the force of law in Bermuda.” However, the Minister of National Security may issue additional fire safety codes.

The announcement comes after firefighters repeatedly raised concerns about understaffing within the service, a phenomenon that worsened earlier this year after an audit found more firefighters were needed to manage the airport division.

While the airport previously operated with three crews of five firefighters, the February audit found that a minimum of 14 firefighters were needed in each crew to maintain the airport’s emergency response category.

In July, Michael Weeks, the Minister of National Security, said a second audit into the need for overseas firefighters had been completed, but the results have yet to be released.

While the government has announced it will hire and train 11 new Bermudian firefighters this year, Mr Weeks said foreign firefighters will likely be needed for “at least” another year as new recruits are trained.

Ten Canadian firefighters traveled to the island in July under 90-day contracts, and it was later announced that another 25 firefighters would be hired to support the airport fire service from October to March. 2023.

In September, members of the Bermuda Fire Service Association said they were boiling over staffing issues within the service.