Queen Elizabeth made history on this date in 2015 when she surpassed Queen Victoria’s service record as a monarch. At Rideau Hall, then-Governor General David Johnston enthusiastically marked the day and Her Majesty’s special achievement.

“The reign of Her Majesty the Queen of Canada has reached 23,226 days, 17 hours and 23 minutes,” the GG said. “It’s been over 63 years! And that means Her Majesty has surpassed her great-great-grandmother, Queen Victoria, as Canada’s longest-reigning sovereign. She did it an hour ago at 12:30 p.m. EST! »

Her Excellency then reminded her audience of the many historic moments Her Majesty has joined Canadians and Canada in celebrating.

“Today marks a defining moment in Canadian history,” he concluded. “But today it is less about longevity and more about the strength of the Queen’s devotion to Canada and the dignity with which she carries herself. As a sign of admiration on this occasion, the Vice-Regal Family of Canada sent a declaration of loyalty to the Queen. This document, which I have signed with every Lieutenant Governor and Provincial and Territorial Commissioner, is a reaffirmation of our loyalty and respect. On behalf of all Canadians, I am pleased to thank Her Majesty the Queen for her long service to our country. May she reign long!

Seven years later, Her Majesty is still serving Canadians, a public service record for our country and the Commonwealth that will probably never be repeated. 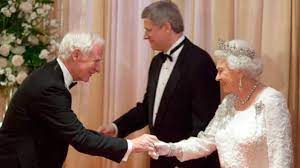 Arthur Milnes is an accomplished public historian and award-winning journalist. He was a research assistant on The Rt. Hon. Best-selling memoir of Brian Mulroney, and was also a speechwriter to then Prime Minister Stephen Harper and a Fellow of the Queen’s Center for the Study of Democracy under Tom Axworthy. A resident of Kingston, Ontario, Milnes is the in-house historian of the 175-year-old Frontenac Club Hotel.

The views, opinions and analyzes expressed in articles on National Newswatch are those of the contributor(s) and do not necessarily reflect the views or opinions of the editors.