‘This is unconscionable’: Biden attacks drug prices during speech at Green River College 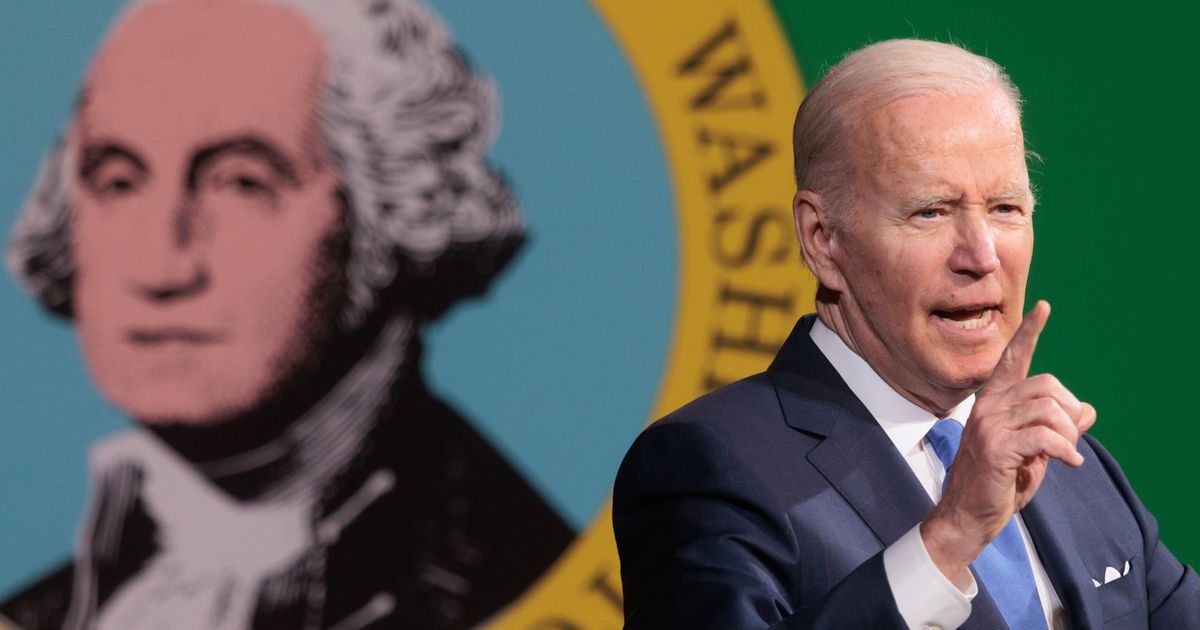 AUBURN — President Joe Biden focused on steadily rising health care and prescription drug costs as the driver of soaring inflation during a speech in Auburn on Friday, calling for action bolder moves to limit drug prices.

Biden has called for a $35 monthly cap on the cost of insulin; for a new tax on pharmaceutical companies that charge exorbitant rates; that Medicare be able to negotiate the cost of prescription drugs; and for a $2,000 annual limit on how much seniors with Medicare pay for prescriptions.

“Prescription drugs are outrageously expensive,” Biden said near the end of the 35-minute speech.

Biden spoke softly during much of his remarks as he touched on other topics, including the Affordable Care Act, community colleges and the cost of child care. But he raised his voice forcefully in pitting drug companies against their customers.

“Imagine what it’s like if you don’t have insurance and you don’t have money, watching your child know what they need and know there’s nothing you can do about it,” said Biden. “You are deprived of your dignity, how do you look at your child?

“There is no excuse, none. We’re not asking pharmaceutical companies to do anything they can’t afford,” he said.

Biden spoke at the student union at Green River College, a community college with about 14,000 students about a half hour south of Seattle. The senses. Maria Cantwell and Patty Murray, Rep. Kim Schrier and Gov. Jay Inslee — all Democrats — spoke briefly before Biden.

The college event followed a morning speech marking Earth Day to a small group of about 70 guests at Seattle’s Seward Park, where the president signed an executive order to protect ancient forests and took swipes at the Republicans, including former President Donald Trump, for not taking climate change seriously.

The Seattle-area visit was the first of Biden’s presidency and came ahead of the midterm elections, as Democrats seek to convince inflation-weary voters they are taking action to ease the rising costs.

After an appearance Thursday in Portland, Biden spent the night in Seattle, where some downtown streets were blocked and two small homeless encampments were evacuated by police near the hotel where the president was staying.

At Auburn, Biden was introduced by Elisa Graceffo and Juliana Graceffo, a mother and daughter from Sammamish who have helped raise nearly $500,000 for diabetes research since Juliana was diagnosed with type 1 diabetes there. 14 years ago.

Juliana explained that she needed up to a dozen injections a day, but now has a monitor that communicates wirelessly with an insulin pump to continuously monitor her blood sugar.

But these devices still need the raw material, insulin, and its costs have gone from about $40 per vial to about $300.

“We haven’t seen anything but increase after insulin costs have increased,” Juliana said. “We need something to change.”

The Washington Legislature this year passed a $35 monthly limit on out-of-pocket insulin costs for people on state-funded insurance plans, such as government employees and those on certain Medicaid plans. The new cap, which takes effect in 2023, was passed with broad bipartisan support.

But most of what Biden proposes needs Congressional approval, currently a high bar with the Democratic-controlled but equally divided Senate, and Republicans all but bent on blocking Biden’s agenda.

He hinted at the hurdles ahead as he touted the child tax credit increase that was passed last year as part of his massive COVID relief measure. That one-year boost reduced child poverty by more than 25%, according to a Columbia University study, but it has since expired and has not been renewed.

“We’re one Democrat and 50 Republicans short of stopping it from going through this time around,” Biden said.

Biden spoke in front of a sign that read “Cutting Costs for American Families,” at a time when inflation rose faster than at any time in 40 years.

Republicans took aim at Biden’s visit, saying it would not help vulnerable Democrats like Schrier in the midterms.

In a call with reporters on Friday, Caleb Heimlich, chairman of the Washington State Republican Party, blamed Biden for the inflation “that has weighed on families in Washington, families in America, for most of the last year..”

Some protesters outside the Auburn event chanted insults at Biden and waved a banner saying “Trump won.”

Among those inside the college for the rare presidential appearance was Ramon Santiago, 27, of Tacoma, who is in his third year at Green River, pursuing a nursing degree. Santiago wanted to know what Biden could do to make college more affordable, especially for those heading into nursing.

“It’s definitely something that’s intimidating for a lot of people,” Santiago said. Biden noted an increase in Pell Grant funding that passed last year, but the measures he touted on Friday were largely about drug prices.

Biden warned that this “will be difficult for a while” as the war in Ukraine continues to contribute to higher gas prices. He said pharmaceutical companies that raise prices faster than the rate of inflation should “pay a high tax”.

Electric and water utilities cannot raise prices at will, Biden said, while questioning why pharmaceutical companies are able to do so.

And he called on Medicare to be able to negotiate drug prices, something Democrats have long been calling for, but never successfully.

Medicare, Biden said, negotiates every price it pays — for doctors, for hospitals, for procedures and surgeries — except for prescription drugs.

Earlier, at Seward Park in Seattle, Biden gave a broad speech about his administration’s efforts to transition all facets of the economy to clean energy, including even the military.

“I’m going to start the process where every vehicle in the U.S. military — every vehicle will be climate-friendly,” Biden said at the outdoor conference in the scenic park from a podium set up among cherry blossoms.

He noted that the recently passed $1 trillion infrastructure act would pay for 500,000 electric car charging stations nationwide and invest $39 billion in public transportation.

“We provided alternatives. They are making and installing solar panels where they once dug for coal,” he said.

Biden also hurled jabs at Republicans whom he called in Trump’s thrall.

He briefly mentioned new revelations about House Republican Leader Kevin McCarthy, who in a taped conversation shortly after the Jan. 6 Capitol riot suggested Trump resign, only to then quickly retreat to the ex-president.

“It’s MAGA party now,” Biden said. “These guys are a different breed of cat. They are not like the ones I have served with for so many years.

Outside Seward Park, some protesters waved signs trying to get Biden’s attention as the presidential motorcade passed. Some have called for faster approval of a COVID-19 vaccine for children under 5.

Others demanded that Biden act more aggressively on climate issues.

Seattle resident Eric Ross held a sign citing Biden’s own comments that climate change is an “existential threat” to humanity.

“He needs to declare a climate emergency and deal with the climate crisis for what it is — a crisis,” said Ross, who has been disappointed with the Biden administration for recently resuming the leasing of federal land for oil drilling and gas.