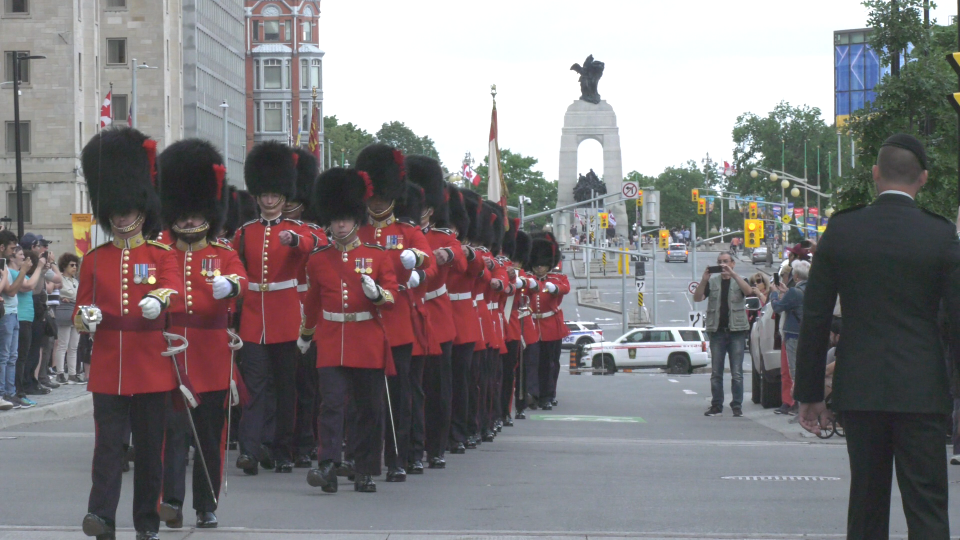 An iconic national institution celebrated in Ottawa on Saturday with the Governor General’s Foot Guards marking their 150th anniversary with a “Freedom of the City” parade.

It was a proud moment for member Xavier Marriot, who wore the traditional scarlet red jackets and bearskin hat.

“I knew since I was 14 that I wanted to be in the military,” the 17-year-old said. “We are exercising the freedom in the city that was granted in the 1800s. Before, they had to grant permission for a military unit to enter the city and we remember that today.”

Since 1872, the regiment has served Canada’s needs in combat and ceremonial roles. As part of the 150e anniversary, the 100th Troop Regiment marched from the Cartier Square Armory to the heritage building of Ottawa City Hall on Elgin Street.

The Marriott family watched from afar.

“We were so proud of him,” said Noel Lapierre, Marriott’s grandfather. “He gets involved and he’s not afraid to get involved and work for his country.”

“He’s only 17, I thought he had such a baby face,” said his mother, Brigitte, spotting him from the crowd. “I know he has trained and worked on his uniform and boots and is very well prepared.”

Marriott, who is currently in the reserve unit, hopes to continue in the infantry in the future. But for now, he is relishing his moment in the 150th celebrations.

“It’s very rewarding and something I will remember for the rest of my life.”

For many in Ottawa, it was the first time in a long time to see the toe guards in action.

Inside City Hall, a new color showcase was unveiled housing the 7th color stand. They are the unit’s battle flags that connect members of the regiment to its glorious past.

The organizing committee has put together events throughout the year, including a 150th anniversary and smoking party on June 7 at the Cartier Square Drill Hall.