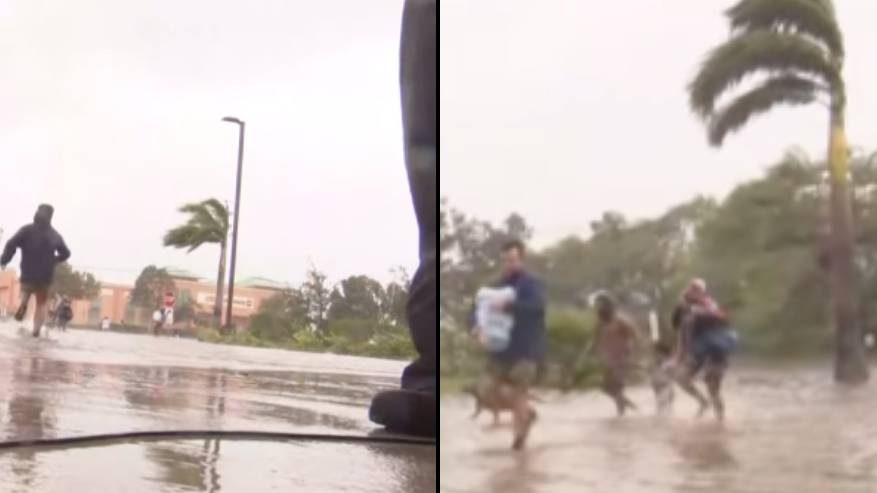 A live cross on an Australian morning show was cut short as a cameraman ditched his kit to lend a hand to those trying to flee floodwaters in the US as Hurricane Ian battered the coast from Florida.

Sunrise crossed live with Channel 7 US correspondent Tim Lester, who was reporting from the city of Naples, Florida on the Gulf of Mexico early Thursday morning (September 29).

In a dramatic moment that was broadcast to audiences across Australia, Channel Seven cameraman Glen Ellis gave up his job to help a group of locals struggling to get through rising waters.

“We’re just helping some people cross the water here, which is our cameraman, Glen, over there. I think you can see he’s trying to help people who are getting away from home. they.”

As the Australian reporter continued his show, Ellis could be seen helping those battling in the storm’s path to flee the rising waters.

A person could be seen holding a child’s hand while struggling to carry their belongings through the rising waters.

Lester continued, “We’ve spoken to a few of them and they’re already telling us their homes got lost in the water, they got flooded, and they had to give them up.”

The Channel 7 reporter explained that they were able to find high enough ground for their live crossing as the weather conditions continued to deteriorate.

Hurricane Ian made landfall in Florida on Wednesday (September 28) as a powerful Category 4 storm with winds of around 150 miles per hour hit the coast.

The hurricane was only a few miles per hour below being classified as a Category Five storm; the highest on the hurricane scale.

NBC reports that the National Hurricane Center has warned of “potentially deadly storm surge, catastrophic winds and flooding across the Florida peninsula” with millions under evacuation orders.

Florida Governor Ron DeSantis warned citizens in an evening speech that the worst may yet be to come.

“This storm is wreaking havoc across the state of Florida,” the governor said, according to Reuters.

He added that citizens can expect the storm to pass through the state on Wednesday and through “much of tomorrow.”