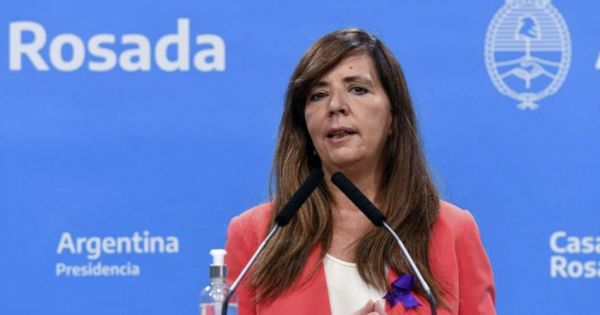 Argentine presidential spokeswoman Gabriela Cerruti on Tuesday denied that President Alberto Fernández’s administration was planning to send a bill to Congress to legislate against ‘hate speech’ and insisted there was already enough instruments to solve the problem.

“There are other tools such as the media law or the penal code,” argued Cerruti after rumors in this regard multiplied following the attack on Vice President Cristina Fernández de Kirchner. (CFK).

The head of the National Institute against Discrimination (INADI), Victoria Donda, had suggested such a legislative approach, but Cerruti said the Penal Code “includes incitement to violence and political discrimination” among punishable actions.

“There is no project being analyzed” against hate speech and “there is no need,” Cerruti said in a radio interview.

Cerruti also argued that the debate should revolve around “what we’re talking about when we talk about hate speech”, because “it’s not that you can’t discuss, debate, investigate, denounce…, the problem , it is the limits that are crossed”. .”

“When you have a political party” president like Patricia Bullrich of the PRO of former president Mauricio Macri who still has not said a word against him five days after the attack on the CFK, “there we have a more serious problem , we are talking about democracy political parties.

“We have a problem, if you think you’re going to build politically on groups of fanatics, what you’re doing is encouraging them,” Cerruti continued. “Hate must be fed, fake news, legal persecution, the fantasy that we are all millionaires and lazy,” she added.

“Kirchnerism tries to distract and proposes a gag law, with the argument that everything that happens is to blame for journalism, justice and the opposition, they seek to control freedom of expression. We will not allow it,” said former PRO governor of Buenos Aires and current congresswoman María Eugenia Vidal.

According The Nation and other major newspapers in Buenos Aires, the hate speech bill was on the table in various meetings between President Fernández and some of his aides.