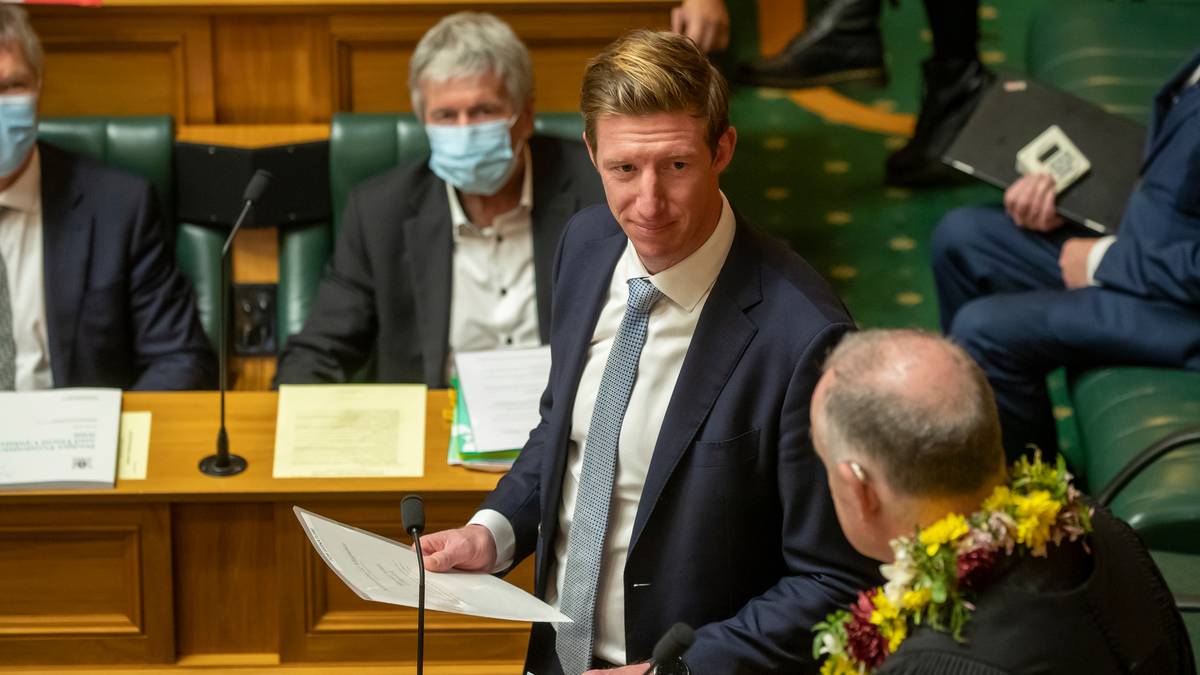 National MP for Tauranga Sam Uffindell during his swearing in of Parliament. Photo/Mark Mitchell

The former banker won a by-election for the Tauranga electorate in June after the resignation of Simon Bridges.

He was sworn in this afternoon and tabled his first bill before addressing Parliament this evening.

Ahead of his speech, national colleagues gave Uffindell shout-outs in their parliamentary speeches – Michael Woodhouse wished him well and Andrew Bayly said he was aware of giving time for “a very important first speech”.

When his turn came, Uffindell said he wanted his children to grow up “in a country that allows you to reach your potential”.

Bay of Plenty MP Todd Muller sat behind him and nodded as Uffindell called Tauranga ‘the epicenter of our country’s horticulture’ and mocked the cancellation of the full Tauranga Northern Link project .

As his speech continued, Uffindell came alive, gesturing as he discussed the need for social investment.

Commenting on his return to New Zealand in 2020, he said: “I was amazed by the general unease that took hold in [in New Zealand]the complacency of this government, the acceptance of mediocrity, the fear of the outside world, the rejection of personal responsibility, the dumbing down of expectations, closed absolutism.

“If we are to fulfill our obligation to future generations to leave this country in a better position than the one we inherited, we must take a serious look at ourselves.”

He spoke passionately about playing sports in his youth.

“Every time I played, my dad taught me how to play to win. And I did, and I loved it. Now we don’t even keep score anymore.”

“We must rise above… prohibitive regulations and nation-limiting policies and do what is right for the Tauranga electorate and our country.”

“In many ways, we [Tauranga] are just a microcosm of the many endemic problems crippling New Zealand.

“The door is closing fast on our ability to keep pace with the rest of the developed world, and one of my biggest fears is that my children will one day grow up in a New Zealand that has moved away from this club.”

Uffindell smiled as he spoke of his family and friends and thanked them for their support.

He thanked his constituents in Tauranga for voting for him and said he will “always be grateful” and “never take it for granted”.

His speech received a standing ovation from his national colleagues.

Shortly after being sworn in, Uffindell introduced his first bill, aimed at stopping gang convoys in Tauranga.

The bill would allow police to fine gang members traveling in convoys $500 on the spot and instantly seize their vehicles for 28 days.

Speaking to the Bay of Plenty Times after his maiden speech, Uffindell said the only thing he was worried about was “that I might get a little emotional at the end when I talk about my family.

“It was actually the first time I read the speech without crying.”

His parents, his brother, his wife and some friends were there to see him speak.

He said they and other MPs gave him a good reception.

He said he was returning to Tauranga soon to meet “key stakeholders” and start “making things happen”.

“It’s an exciting time to be in Parliament.”

• Members are not allowed to sit or vote in the House until they have taken the oath.
• They can choose to take the Pledge of Allegiance or an “Affirmation”. Either option can be spoken in English or Te Reo Māori.
• Members are usually sworn in by the Governor General, but after a by-election, the Governor General authorizes the Speaker of the House to do so.
• The Pledge of Allegiance: “I, …, swear that I will be faithful and bear true allegiance to Her Majesty Queen Elizabeth II, her heirs and successors, according to law. So help me God. “
• The statement is the same, but omits “so help me God”.