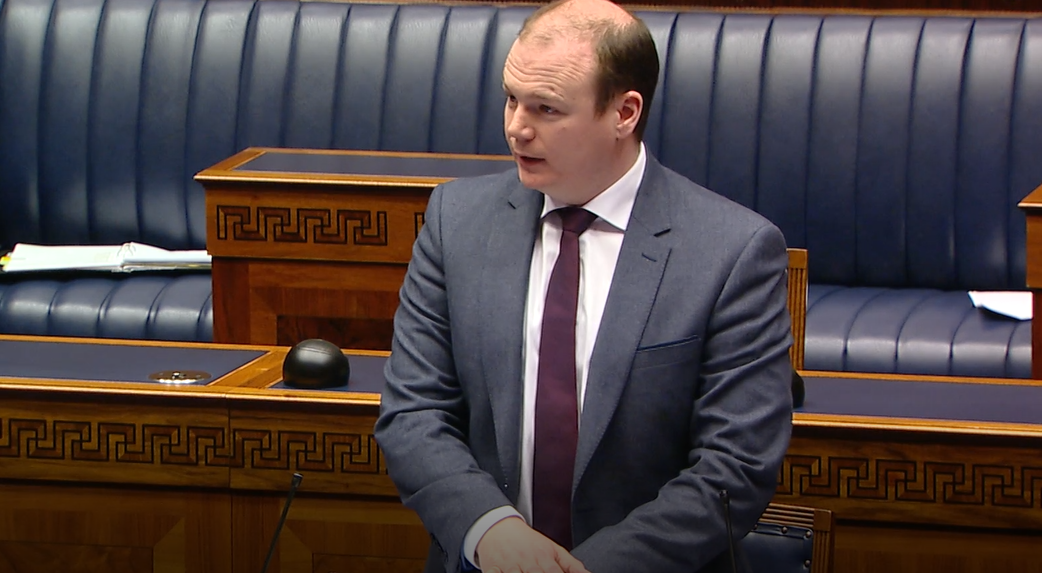 Mr President, I wish to inform Members of my decision to commission an independent review of Invest Northern Ireland.

I know there has been a lot of interest in the House, and across Northern Ireland, for the launch of this review.

I’ll start by putting this announcement in context.

Over the past decade, Invest has had a fantastic track record of making Northern Ireland the most attractive location in the UK, outside of London, for FDI. We have seen the province become a global leader in cybersecurity, fintech and advanced manufacturing. We have seen Invest supporting established companies win new contracts in overseas markets – as I saw with my own eyes during a recent visit to the Middle East; and they have helped new small businesses find buyers and partners in new markets – one of the best examples being the ‘Going Dutch’ program which I had the opportunity to experience once again while visiting and chatting with participants from the most recent cohort in Amsterdam last year.

So, while there is no doubt that Invest NI has a good track record, there is also no doubt that the economy of Northern Ireland has been significantly affected over the past two years. The impact of COVID has accelerated change and given us an opportunity to reset as we build a healthy economy for all.

Thanks to various national and local government interventions, there are now clear signs that our economy is rebounding from the impact of Covid-19, and although the pandemic has had a profound impact on the local labor market, many indicators continue to hint at improvements.

Economic activity is at its highest level in 13 years and business confidence is on the rise, with many businesses optimistic about the outlook for 2022.

I recognize, however, that some indicators have not yet returned to pre-pandemic levels and that there are still negative effects felt disparately across various sectors and groups in society.

As we seek to consolidate and drive recovery for all in Northern Ireland, it is imperative that we look at our position holistically.

Throughout the pandemic, industries and consumers have had to pivot to cope with the new business environment since leaving the European Union and deal with the friction caused by the Ireland/Northern Ireland protocol.

Public sector budget constraints remain a major challenge and my department is currently seeking to identify the most sustainable financial model to meet local economic priorities and allow us to continue to provide quality services with reduced resources.

However, I am confident for the future.

Our 10X Economic Vision – released in May 2021 – sets out our ambitions for the next decade and aims to create a step change in the way we improve our economy. He has received support from people who work in business, from skills and from people across the House.

Delivering on this bold vision, which puts innovation at its heart, will ultimately place Northern Ireland among the world’s elite small advanced economies.

As I mentioned earlier, Northern Ireland already has world-class strength in a number of areas, including fintech, cybersecurity and advanced manufacturing – but we need to build on these strengths. We cannot stand still while the world moves on.

In support of this overarching vision, the Department has launched a number of publications that focus on some of our key policy levers, including “Skills for a 10X Economy” and “Trade and Investment for a 10X Economy”.

10X is also the backbone of my department, with each division working towards a common goal; whether in EF, HE, Skills, Energy or Economic Development. The excellent work of other departments can also contribute to this 10X vision.

But achieving our vision cannot happen in isolation. As a regional economic development agency, Invest NI’s role in translating the 10X strategic goals into a new, updated and inclusive economic reality is critical.

This exciting opportunity for generational change—along with the executive’s “New Decade, New Approach” commitment to review independent bodies—underpinned my decision to commission an independent review of Invest NI.

Now is a good time to take stock and ensure the organization is ready to respond to a changing economic landscape towards an economy that aspires to be ten times better.

The review, which I launched on January 26, will be led by Sir Michael Lyons, former chairman of the BBC and current chairman of the English Cities Fund. For the avoidance of doubt, he’s not related…although he’s clearly of good stock!

Sir Michael recently chaired the Belfast Innovation and Inclusive Growth Commission. His distinguished background and depth of relevant experience will be crucial in leading this public debate on the future of economic development in Northern Ireland.

I am delighted to also confirm that Dame Rotha Johnston and Maureen O’Reilly have been appointed to support Sir Michael in carrying out the review. Together they bring a wealth of business and economic experience in Northern Ireland to complement Sir Michael’s skills and experience.

I can assure Members that the review will be completely independent of my department and I have asked the panel to engage widely in this House and in Northern Ireland to ensure that it gathers all relevant views.

Sir Michael will update me on progress in April and I expect a final report to be delivered in September this year.

I am sure that all of this House will wish to join me in wishing Sir Michael every success in his new role and encouraging stakeholders from all sectors and all regions of Northern Ireland to ensure that their voice is heard.