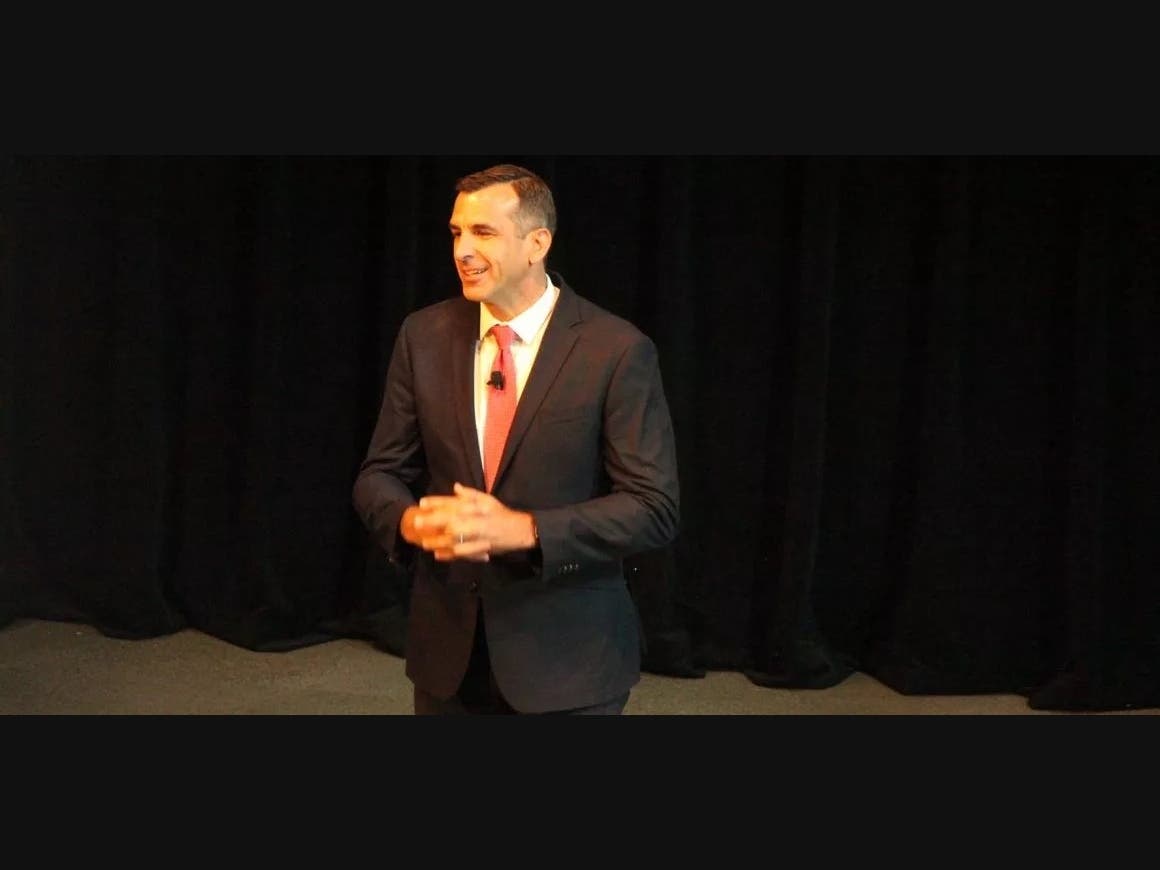 In his final official address in San Jose, Mayor Sam Liccardo spoke of the city’s victories under his leadership over the past eight years.

It was the first time the mayor delivered his annual State of the City address in person since 2018. More than 600 people attended the event at the California Theater in downtown San Jose on Thursday.

The mayor called his greatest successes helping San Jose pull out of a recession, settle its contentious pension battles, and endure major staff and service cuts. For the first time in 20 years, the city’s budget office is forecasting modest surpluses for the next five years.

Those extra dollars allowed San Jose to extend library hours, repave or seal more than 400 miles of streets by the end of the year, and pick up 9.2 million pounds of trash. Last year.

“San Jose has thrived by overcoming time myopia – fixing our focus on the future. Saving for the future. Investing for the future,” Liccardo said during his speech. immigrants who shaped the character of San Jose: sacrificing themselves in the present, even in the most difficult times, for a better future for our children.”

The mayor said he hopes San Jose’s financial turnaround will be how the history books remember its legacy. The mayor took office under the cloud of a costly legal battle stemming from cuts to Measure B pensions, which he once supported, and was at the center of civil unrest following the police killing of George Floyd, a turbulent Trump administration, an unprecedented global pandemic and a mass shooting that captured national headlines.

“We have endured so much together during the pandemic, mass shootings, droughts and floods,” Liccardo said earlier Thursday. “We’ve been able to come together in the difficult times of the present and still keep an eye on the future…I think that’s the defining character.”

The mayor gave his speech four months before his resignation. Asked about the timing of the speech, Liccardo said it was delayed to ensure he could perform in person.

Jesus Flores, president of the Latino Business Foundation, praised Liccardo for leading the city through its toughest times.

“Listening to all the new programming, it’s clear that San Jose has done a great job,” Flores said. “I love that we’ve brought broadband services, especially to low-income communities. I am very happy with the work that was done. »

Liccardo, who once called the city’s homelessness its biggest failure, struck a more optimistic tone in the face of the crisis on Thursday. He touted solutions such as temporary housing sites that housed 686 people, more than 200 motel rooms converted into housing, and the exponential success of backyard homes.

“After years of rotation, we are finally seeing encouraging signs,” Liccardo said. “The latest census showed that we have finally begun to reverse the generational expansion of our homeless homeless population.”

Santa Clara County’s latest point-in-time count found that despite San Jose being home to 6,000 residents as of 2019, homelessness in the city has increased by 11%. Liccardo highlighted new approaches such as job opportunities for homeless residents.

“Leaving this speech, I think (Liccardo) is a good man,” District 3 resident Anne Wilke told San Jose Spotlight. “It’s clear that he forced real changes and I noticed a difference. Homelessness is not his problem, it is ours for years to come. But the street improvements are what got me most excited – things like bike lanes.

Despite staffing shortages within the police department and rising traffic fatalities, San Jose is considered one of the safest major cities in the United States – a fact the mayor shared with enthusiasm.

San Jose has hired 200 police officers in the past five years; it invested $100 million in 30 different traffic safety solutions last year and invested in better training and equipment for the city’s fire department.

But Liccardo said more needed to be done to build trust in the police, especially after the 2020 civil unrest. city ​​council before the end of the year. “It’s not just about having more police; it’s about improving policing,” Liccardo said. “We are restoring the legacy of community policing pioneered in San Jose, launching regular foot patrol teams that build relationships and trust with residents.”

For gun reform advocates like Sarah Bayrele and Julie Henig, this is the high point of Liccardo’s tenure.

“There were a few challenges, but we really appreciate his innovative approach. And I think that’s a model for the whole country,” Bayrele, a Moms Demand Action volunteer, told San Jose Spotlight. “That’s what brought us here tonight.”

After going through two droughts, Liccardo pushed for major investments in water technologies. He said San Jose should invest in reclaimed water purification — an idea that was applauded by the public. He would also like the city to explore desalination, despite its high price.

“We have to face our climate crisis,” Liccardo said. “The threat is not merely possible or probable, but palpable, as we regularly experience bouts of drought, fires and extreme heat.”

San Jose made its grids greener with the launch of San Jose Clean Energy, which relies on renewable energy sources like solar power. Gov. Gavin Newsom has announced a goal to decarbonize the state’s grid by 2045 — but San Jose will hit that goal 20 years ahead of schedule. The city has also invested in mass transit such as the BART expansion project and Caltrain electrification.

The board will decide in December whether to launch San Jose’s own utility in partnership with Google — a decision Liccardo said San Jose must make “to achieve a more resilient and reliable energy future.”

“Over the remaining months, I (and my departing colleagues) will continue to walk the strip, doing everything we can to ensure that our next mayor and our next council succeeds in serving this great city,” Liccardo said at the end of its 40 minutes. word.

“The speech was an adequate recap of the many things the mayor has done,” Jimenez told San José Spotlight. “Although we may not always agree, I appreciate his many years of public service in a city we all love.”