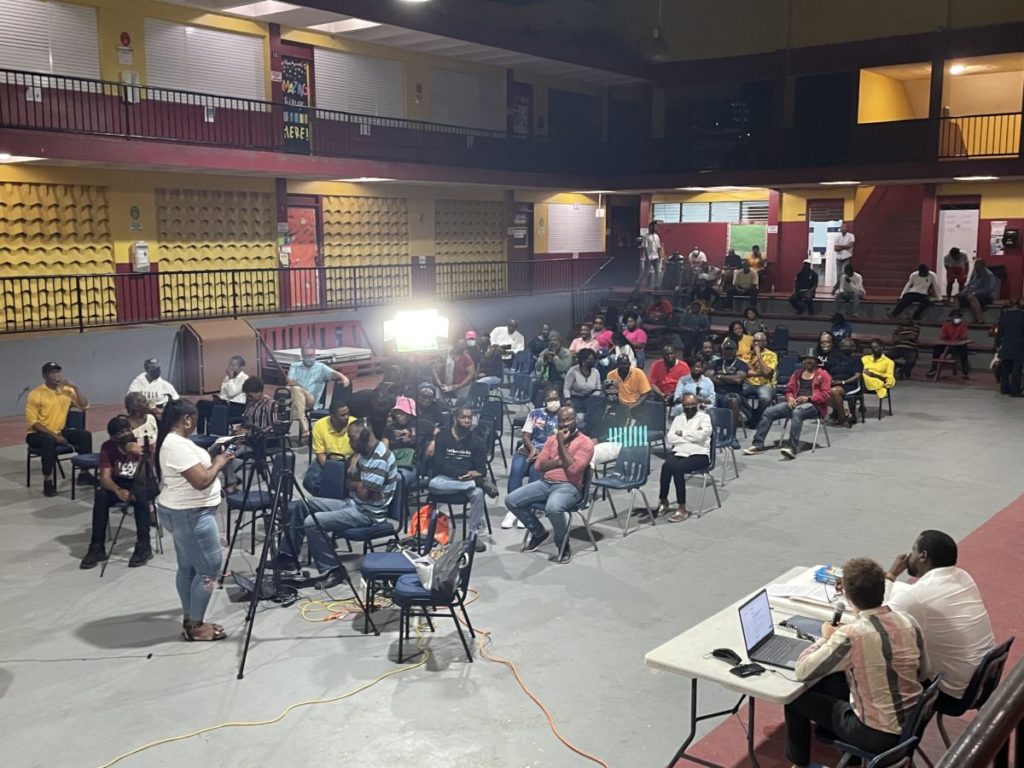 Members of the Virgin Islands community have accused Gov. John Rankin of hypocrisy over his statement about corruption in the territory.

They argued that he focused heavily on corruption in areas controlled by local elected government officials, but glossed over the corruption highlighted in areas run by his office.

Speaking at a community meeting at Althea Scatliffe Elementary School yesterday, local activist Amberly Crabbe said the governor had done everything to circumvent the problem of corruption within the Royal Virgin Islands Police.

“On Friday there was a question from the media asking about corruption in the police force and he eloquently explained that he was dealing with it, and they were cleaning up in the police force. “We haven’t heard that he was going to get rid of the police commissioner and dismantle the police. So why are you dismantling the whole country without any justification,” Crabbe said while receiving resounding support from the residents in attendance.

The local activist took another swipe at the governor claiming he was insulting her intelligence of her and the people of the Virgin Islands.

“I watch the governor sit Friday that no decision has been made based on the recommendations that have been presented. I need you to understand that our government officials who have been handpicked to meet the Governor and Miss [Amanda] Milling had access to this document just over 48 hours ago and they have to decide our future in a few hours based on the contents of this document,” she said.

“They have already made their decision. The decision has been made. This rally is for us to come together and take to the streets and let them know it’s not going the way they think it’s going,” she added to an angry crowd.

The chosen ones are doing pretty well

Meanwhile, one resident – speaking to an audience packed with attendees including elected officials Shereen Flax-Charles, Alvera Maduro-Caines and Kye Rymer – said the things BVI elected officials had in their control had been well served for the most part.

“We are not perfect. I don’t want to say that we are, but I’m saying that if you ask us how we are able to manage our finances or the area that is delegated to us, they are doing much better than the areas that have been delegated to the Governor and the chief of police,” he said.

“We have been calling for investigations and changes in our policing system for over 25 years. We try to ask high; we try to ask low. We said maybe you should try to have a local police chief, but they said no. The system remains the same. The governor is just sitting there,” the resident added.

He then used a reference from a doctor to highlight what he described as hypocrisy on the part of British officials in scolding the operation of the Virgin Islands.

“Can you imagine you go to a doctor and say you have something that hurts you and they sit down and they look at you and see you have cancer, and they don’t tell you anything and they want you to stay that way until you reach a state where they expose you to the world that this person has stage four cancer. In what area? In the area that they are responsible for,” he said. declared.

A resident also pointed out how the governor’s statement regarding the police force differs from other public bodies.

She said: ‘When the governor was reading the COI report he said he was willing to collaborate and work with the chief of police but everyone and everything else is a direct rule or he is doing a great job. work,” the resident said with the audience clapping in agreement.

Copyright 2022 BVI News, Media Expressions Limited. All rights reserved. This material may not be published, broadcast, rewritten or distributed.