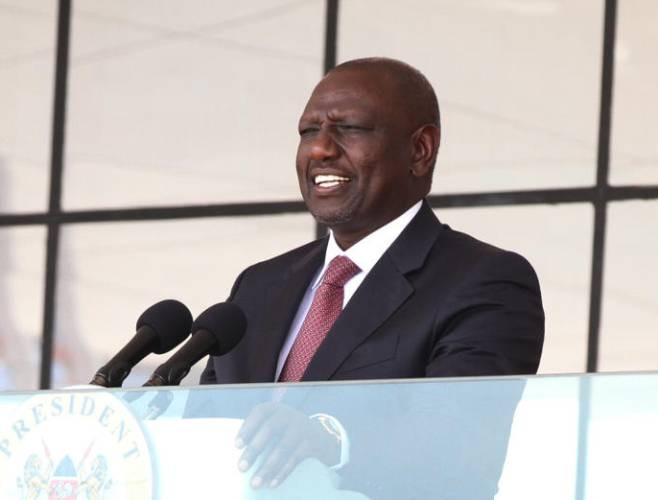 President William Ruto began his Mashujaa Day speech at 12:45 p.m. on Thursday and ended it at 1:55 p.m. in what was described online as a “long-winding speech”.

Unlike his speech to the Bicameral Parliament on September 30 which lasted only 33 minutes, Mashujaa’s speech today was 20 minutes shorter than a full football game.

A section of reporters said they struggled to find catchy phrases from the president’s speech to use in later newscasts.

Others said the speech was heavy on boardroom lingo, failing to address the pressing needs of ordinary Kenyans.

A majority of online users said they hoped the president would address the high cost of living and the measures his government would take in the coming days to protect citizens.

Prior to his 20-page speech, Ruto’s deputy Rigathi Gachagua, known for his off-the-cuff remarks, stuck to his three-page written speech, which was uncharacteristic of him, based on his previous speeches.

Nairobi Governor Johnson Sakaja of the host county was the only other leader to speak at the ceremony held at Uhuru Gardens. His speech, delivered in front of that of DP Rigathi Gachagua, lasted six minutes.

Netizens said President Ruto’s speech was devoid of any connection to the common mwananchiand was long and elite.

Below are some examples of reactions from Kenyans on Twitter:

Edwin H. Dande (@ehdande) said, “What’s going on? President Ruto now seems detached from his speech… He is only reading it. No emotions, connection, vigor or passion. Just neutral. No off-the-cuff comments.

Etuku Ham (@hametuku) said, “I slept and woke up, and Ruto is still reading his speech.”

Bii (@bii_amon) said: “I slept in the middle of this long speech. I don’t understand [the message the president is putting across].”

Ngong’u Kiarie (@Joekiash) said: “President Ruto’s speech today is too long. I think it should be distributed in schools and used as a textbook. It has a country tone. Boss (Ruto), you are now behind the wheel. [We need] stock.”

Voice of Langata (@Midila_Thunder) said, “When a speech is too long and there are no tonal variations or dramatization, it becomes a lullaby, no matter how instructive.”

In his remarks, President Ruto said, among other things, that the Hustlers’ Fund, which he will officially launch on December 1, will allow SMEs to save under the program, and for each savings made, the government will add to it. half the amount.

The head of state also ordered the Kenya Forest Service to hire an additional 2,700 rangers and 600 forest officers to protect water towers and combat encroachment.

At the start of his speech, he thanked Kenyans for voting for the “farmer’s son” as the country’s fifth president.