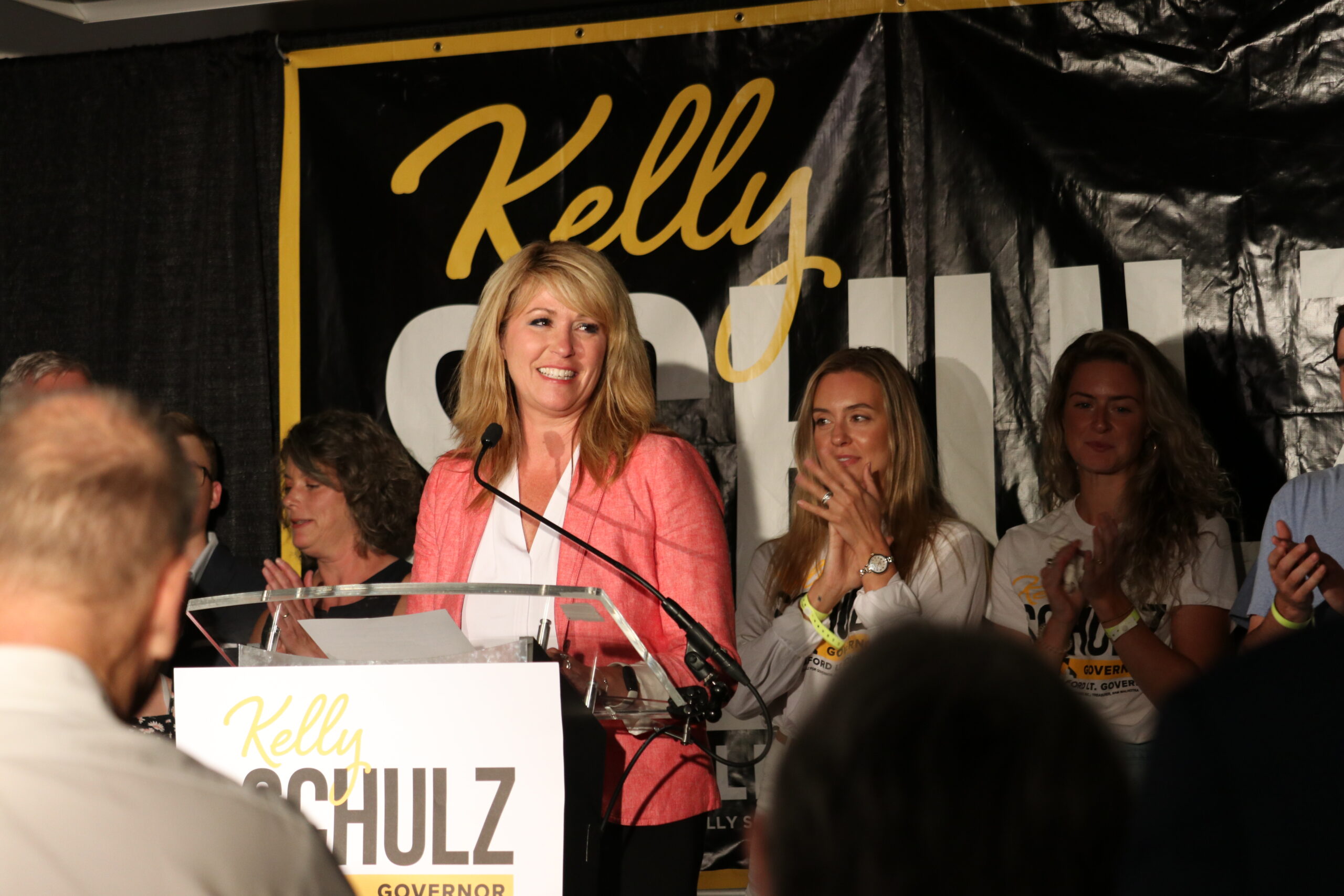 As Maryland counties wrapped up vote counting from the June 19 primary on Friday, Republican gubernatorial candidate Kelly Schulz released what amounts to a statement of concession.

While his GOP rival, Del. Dan Cox (R-Frederick), claimed victory on election night, Schulz steadily added votes in his favor as mail-in ballots were tallied statewide. Cox led by a 16-point margin on election night. That had fallen to around 9.5 points by 6 p.m. Friday when Schulz tweeted his statement.

There are still more mail-in ballots to be counted in the state, mostly in Montgomery County, but Cox leads by more than 27,000 votes.

The GOP primary pitted Schulz, who was backed by popular term-limited Governor Larry Hogan (R), against Cox, who was endorsed by former President Donald Trump.

“While we are very disappointed with the outcome of this election, I am proud of the campaign we ran and am forever indebted to our supporters and friends who fought alongside us,” the statement read. “We ran a campaign based on the truth and the issues that really matter to the people of Maryland. Affordability, crime, education – the things families struggle with every day. More importantly, we have never lied to the people of Maryland. We respected them enough to tell the difference between what was real and what wasn’t.

During the campaign, Schulz and Hogan condemned Cox’s attendance at a “Stop the Steal” rally on Jan. 6 and several of his controversial and misleading past statements. Hogan said he would not support Cox in the November general election; Supporters of Schulz have said his primary victory virtually guarantees Democrats will regain control of the governorship in November.

“Coming January, Maryland will be under one-party rule, with no checks and balances. This is not progress and I am deeply concerned about the consequences,” Schulz said in his statement Friday. “In politics, there are no ultimate wins or losses and I will always remain optimistic about the ability of the people of Maryland to overcome any obstacle. I will always have hope for the future and a faith in the goodness of people and in the greatness of our State.

“Congratulations to the Republican candidates up and down on the ticket,” the statement concluded.

Robbie Leonard conceded in the Democratic primary for Baltimore County state’s attorney on Friday, after having a slim lead in early returns on election night.

However, as absentee and provisional ballots were counted over the past 10 days, incumbent Scott Shellenberger garnered thousands of votes, leading the race by 2,115 votes when counting ended on Friday.

“We missed out on victory, but we started a real conversation for change. And Baltimore County voters deserve change,” Leonard said.

In the concession statement, he advocated for the state’s attorney’s office to create written policies to prosecute sexual assaults – the office’s practices have be subject to scrutiny and are subject to ongoing federal lawsuit – and to examine racial biases in political decisions.

Leonard also said he would donate the remaining balance of his campaign account to the Daniel Carl Torsch Foundation, a non-profit organization that provides support to members of the community struggling with substance abuse, substance abuse and of mental health.

Shellenberger has been on leave from his office, The Daily Record reported Thursday, citing exhaustion. He released a statement on his victory on Friday afternoon.

“Many different voices have been heard throughout this primary election, and I have been encouraged by the instances where issues have been discussed and debated fairly,” Shellenberger said.

Meanwhile, in Baltimore City, the winner of the Democratic state’s attorney primary appears to have no contest for chief prosecutor in November’s general election.

Ivan Bates (D), defense attorney and former prosecutor who also ran for office in 2018, won the city’s Democratic primary with more than 40% of the vote on Friday.

On Friday morning, he was joined at a press conference by Roya Hanna, also a defense lawyer, who had launched an independent campaign to become a prosecutor. Hanna, who originally filed as a Democrat, dropped out of the primary to retain the chance to challenge Marilyn Mosby in November, should the incumbent prevail in the Democratic contest.

Mosby, however, came in third and Hanna said Friday she would retire from the race, clearing the way to victory for Bates.

“My goal when I started the campaign was to bring about change in our city,” Hanna said in a joint appearance with Bates. “I put the safety and security of the people of Baltimore City ahead of my own political interests, because for me it was never about personal ambition, it was about having a professional prosecutor in this office.”

The deadline for Hanna to meet the candidacy requirements and file her candidacy as an independent in the November general election would have been next Monday.

No Republican ran for office.

Baltimore City House Delegation Chair Stephanie Smith (D) celebrated victory Friday in her re-election bid, after finishing among the top three candidates in a five-way race to represent District 45 in the House of delegates.

The final returns, reported Friday evening, showed Smith in second place among Democratic voters in the district, with 22.85% of the vote.

Jackie Addison, a community activist and member of the Baltimore City Democratic Central Committee who works for the mayor’s office, finished first with 25.34 percent of the vote.

Caylin Young, an attorney who serves as the deputy director of the City of Baltimore’s Office of Equity and Civil Rights, finished third, according to unofficial results.

Smith, who was first elected to the House in 2018, was opposed to her re-election bid by District 45 Sen. Cory McCray (D).

“While there were perplexing forces that not only counted me out – but tried desperately to get me out – they were ultimately denied. This is what makes democracy beautiful and sacred: ONLY voters choose their Leaders,” Smith tweeted Friday night.

“In the general election, we must work diligently to ensure the success of our Democratic ticket statewide,” Smith continued, highlighting the party’s candidates leading the poll. “…With strong partners in these statewide offices, I can do even more to help our district, city and state. Let’s go! »

With an interim survey yet to be completed and a partial count of tens of thousands of mail-in ballots, Montgomery County residents are waiting to see who will be the Democratic nominee – and overwhelming general election frontrunner – for the executive branch of the county.

Montgomery’s vote count will continue Saturday and likely into next week; County election officials have set a goal of certifying the local vote count by Aug. 12.

There were at least 72,000 absentee and provisional ballots to be counted in the county; more than 49,000 interim and mail-order results were reported in races for governor and county executive.

Like all good advocates, the leaders of the Maryland League of Conservation Voters know where the power lies in Annapolis. The environmental group announced this week that it had named the presidents of the General Assembly — Senate Speaker Bill Ferguson (D-Baltimore City) and House Speaker Adrienne Jones (D-Baltimore County) — its lawmakers from the year for 2022.

LCV cited the pair for their leadership role in driving the Climate Solutions Now Act in 2022 through their chambers.

“The Climate Solutions Now Act is the nation’s most significant climate legislation and positions Maryland as a national leader in addressing this pressing issue,” Maryland said. VUL Executive Director Kim Coble. “Senate Speaker Ferguson and Speaker Jones have been unwavering in their efforts to ensure this landmark legislation crosses the finish line with strong support.

The LCV will present the awards at its annual dinner on September 15 in Baltimore.

In separate statements, Jones and Ferguson said they were honored by the designation and vowed the climate bill would be just the beginning of their fight to improve the environment and public health in Maryland.

“The General Assembly has more to do going forward to ensure the future health of all Marylanders,” Ferguson said.

“Everyone in Maryland should have clean air, clean water, and resilient communities,” Jones added. “Thank you, Maryland League of Conservation Voters for this award and for your support as we continue to work for a cleaner Maryland.”