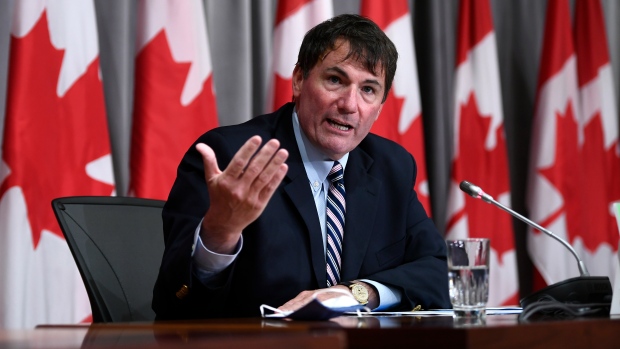 Appearing before the Procedure and House Affairs Committee on Thursday, LeBlanc said he had hoped the work of narrowing the Canadians’ recommendations to replace former Governor General Julie Payette would be completed sooner.

“In my excitement, I forged ahead hoping that the process I was part of, the advisory committee the Prime Minister set up to review the recommendation of a shortlist of exceptional Canadians to replace Ms. Payette, I had hoped that this process would have concluded sooner,” he said.

“The good news, from our point of view, is that we have completed our work, the Prime Minister will have our recommendations in the next few days.”

He said the advisory committee held 12 meetings and came up with an “interesting” list.

Payette resigned from her post in January following an independent review of allegations of workplace harassment at Rideau Hall.

“Everyone has the right to a healthy and safe work environment, at all times and in all circumstances. It appears that this has not always been the case in the Office of the Secretary to the Governor General,” Payette said in a January 21 statement.

LeBlanc co-chaired the panel alongside Janice Charette, a former high commissioner to the UK who now serves as clerk of the Privy Council while regular clerk Ian Shugart undergoes cancer treatment.

Currently, Chief Justice of Canada Richard Wagner serves as Administrator, until Trudeau recommends a new Governor General to the Queen.

Experts have called for a speedy review process for candidates, warning that having a chief justice in the role for too long could be problematic.

That sentiment was echoed by committee members Thursday who said that with the Liberals in a precarious minority government position and there are signs of an election in the fall, it would be “unfortunate” to drag Wagner into “political games”.

LeBlanc says he is well aware that the current situation is not ideal in the long term.

“I recognize that it is an unusual time to have the Chief Justice as an administrator, so I hope his volunteer effort to help the country in this capacity will come to an end soon,” LeBlanc said.

The committee is studying Bill C-19, a bill that the government says, if passed, would help make a pandemic election more feasible.

Among other provisions, it would establish a three-day voting period to distribute voters and adhere to public health guidelines like physical distancing. It would also seek to make the voting process more accessible for residents of long-term care facilities and improve the mail-in voting system.

However, in a statement to CTVNews.ca, Elections Canada said it was able to put security measures in place without the bill. The federal agency said it had been preparing for a pandemic election for several months, talking with health officials about what was needed and doing what it could under current law.

With a file from Rachel Aiello of The Canadian Press and CTV News.