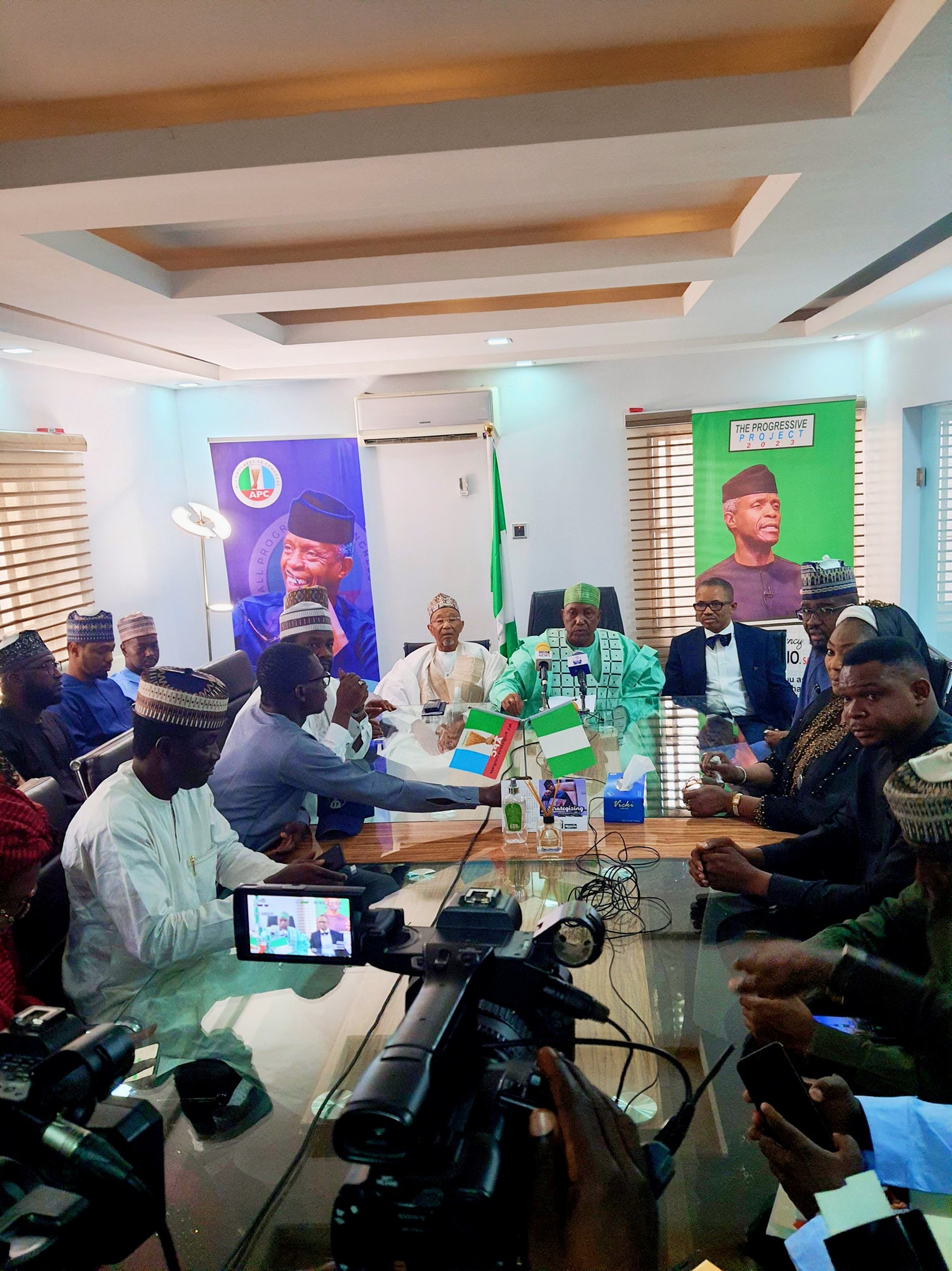 He immediately took a jab at another presidential hopeful, stating that:

“For Professor Yemi Osinbajo, this race is not a matter of personal ambition but a positive response to the populist call for citizen mobilization that began without input from him or his office.”

Gaya, former governor of Kano between 1992 and 1993, took office today at the campaign’s office 15B Buchanan Street, Abuja.

Before today, he had been a patron of the Osinbajo Volunteer Movement and said his duty would be to coordinate for victory the various groups pushing for Osinbajo’s candidacy as President Buhari’s successor.

He explained at a press conference how his past involvement in Osinbajo’s presidential project led him to his new position.

He said Osinbajo would win the All Progressives Congressional ticket regardless of how the process was done.

“What is most important is what the law says and the law of the land, as given by the electoral law, states that there must be direct, indirect or consensus primaries.

“Believe me, whichever of the three options is finally chosen by the experienced and direct management of APC, Professor Yemi Osinbajo will win! Much more than some people realize, a large majority of party members and the electorate are with Osinbajo”.

“On behalf of all the members of various advocacy groups, prominent political leaders and citizens too numerous to mention but whose consultations have resulted in my being here today, I welcome you.

“As you all know, The Progressive Project (TPP) is a mass citizen project calling for the candidacy of Vice President Yemi Osinbajo as the APC presidential candidate in the upcoming elections.

“We are succeeding and my specific mission here is to lead a process of recalibrating all pro-Osinbajo populist forces towards electoral victory under the APC banner.

“Our duty is the coordination of all the support groups: it is not the Campaign Council.

“For Professor Yemi Osinbajo, this race is not a matter of personal ambition but a positive response to the populist call for citizen mobilization that began without any input from him or his office.

“Note that people from other parties and even millions of nonpartisan citizens who do not belong to any political party have a strong interest and involvement in this campaign for Osinbajo’s candidacy.

“Without an iota of doubt, I am sure that all knowledgeable people here can attest to the qualities and competence of Professor Yemi Osinbajo.

“You will also agree with me that his chosen method is redefining presidential pronouncements in Nigeria; he made it clear that noble citizens need not descend into the gutters. No touts were hired by anyone and his message effectively reverberated throughout the country and the diaspora.

“Globally, climate change, insecurity, drug trafficking, economic issues such as unemployment and inflation along with many other challenges have worsened and all are impacting Nigeria and many other countries.

“However, by electing someone of Professor Yemi Osinbajo’s pedigree who has direct insight into the depth of our challenges as well as the current strategies and tactics in place to address them, we stand a great chance of moving forward. forward without wasting too much time.

“Nevertheless, many things are said by many; as true democrats and as progressives, we will continue to defend the constitutional rights of citizens to hold their own opinions, but we must all be wary of those whose sole concern is spreading this hatred and suspicion that seeks to keep our country down.

“Even an internal question about the price of our party’s nomination form is being deliberately misinterpreted in some circles as we believe that, unlike bags of money, our truly populist candidate is popular enough to pool token donations from supporters. and collect this money easily.Only one youth group with TPP, the Progressive Group alone, says they can raise 100 million naira with approximate voluntary contributions of 10,000 naira each by 10,000 of their supporters willing to see a better future.Our Populist Mathematics is impeccable and very strong;the moneybags inside or outside APC will only lose their dollars in any competition against the will of the people.

“Unlike the history of some other political parties, records show that neither the APC’s presidential ticket nor his vice-presidential spot was ever won by throwing money, but by populist endorsement from the North and the South.
We note that fear of real people power has prompted some elements to resort to increased propaganda in recent days; a few sponsored slanderous articles appear here and there and through our longtime friends in the mass media we monitor the sponsored pawns and their sponsors. We will not stoop low to play gutter politics and we have continued to warn our supporters against getting involved in insults and defamation. We are democrats, we believe in bringing people together and submitting ourselves and competing ideas to the evaluation and decisions of the people through the ballot box.
For us at the TPP, the unity of Nigeria as well as the unity of all progressives remains paramount.

“We are aware that a group of very few pessimists who try to deceive themselves and their sponsors about their slim chances are also spreading false narratives in a futile effort to demarket Yemi Osinbajo. Some said some elements of the opposition probably had something to do with it, fearing the APC’s much improved prospects of victory with Osinbajo as its presidential candidate.

“Let it be emphasized once again that all the populist forces behind Prof. Yemi Osinbajo fear no enemy and hate no one; we are uncompromisingly focused on the unity, progress and development of Nigeria and we will not sink into gutter fights with any person or group.
Indeed, we pride ourselves on the fact that APC has the richest range of skilled, people-oriented aspirants to choose from. We, here at TPP, are also convinced that the widely recognized qualities of our candidate make him stand out. Indeed, as a Vice President who has ably defended his principal – thus earning the admiration of all sections of this great country – Vice President Yemi Osinbajo has a right of first refusal at this crucial moment in the Nigerian history.

“Like hundreds of our support groups and like millions of Nigerians who have called on him to come out and challenge, I have complete confidence that through the power of the Almighty and the voting power of millions of Nigerian citizens across the six geopolitical zones, Yemi Osinbajo will succeed President Muhammadu Buhari on May 20, 2023.

“In terms of the debate over whether our party should consider direct, indirect or consensus options for the presidential primaries, we believe that nothing is set in stone and some things are subject to change at any time. What is most important is what the law says and the law of the land, as given by electoral law, states that there must be direct, indirect or consensus primaries.

“Believe me, whichever of the three options is finally chosen by the experienced and direct management of APC, Professor Yemi Osinbajo will win! Much more than some people realize, a large majority of party members and the electorate are with Osinbajo.

“At this juncture, I wish to thank the millions of great patriots including APC members, opposition party members and all those non-partisan Nigerians who strongly believe in the candidacy of Professor Yemi Osinbajo as the best option. to move Nigeria forward More than any other presidential candidate in Nigeria today, Osinbajo is far ahead of any other when it comes to chances of winning votes across parties.

“My message to all of us today is that we need to involve other stakeholders more in everything we do; bigger than the tread of mighty armies is an idea whose time has come and together. Like the symbolic pile of unbreakable brooms, we can all help make great progress for our party and our dear nation.
Looking forward to a just and well-deserved victory, we thank the nearly eight thousand delegates of our party for their objective sensitivity to the pulse of the electorate.

“Most grateful are the self-effacing but considerable efforts of all those governors, senators, honorable members of the House of Representatives, and all other elected officials and elders who have strongly supported this project.

“Our recalibration for impactful political transformation involves pooling all our contacts, experiences and other resources so that all other groups can contribute to the actualization of a formidable political front.

“I see that so far our women’s and youth groups are doing well, but we need to keep up the pace and even do more; I applaud the enthusiastic efforts you all have continued to make on social media, in traditional mass media and elsewhere.

“The Progressive Project (TPP) thanks the Nigerian media for keeping alive the sense of patriotic mission that has existed since the days of Nigeria’s struggle for independence. While a few elements may have made themselves available to these deep-pocketed manipulators who are desperate to manipulate the perceptions of citizens, a vast majority of the Nigerian media have steadfastly continued to discharge their duty to inform us, to enlighten us and to entertain us in a very objective way. I’ve been asked to name a few outstanding allies like Human Rights Radio, but I won’t be tempted to do so at this point.

“There are just too many people to thank for the efforts made so far and the preparations to go even further in the coming weeks; we will endeavor to prosecute anyone who sincerely believes they are an important part of this project. Our collective mission is destined to be strengthened and we have more and more chances of winning the next presidential primaries as well as the legislative elections.
Great Nigerian people, we are at the dawn of history; together, we will reaffirm our commitment to populist and progressive ideals by electing Professor Yemi Osinbajo as its leader.

“Thank you all for listening.”