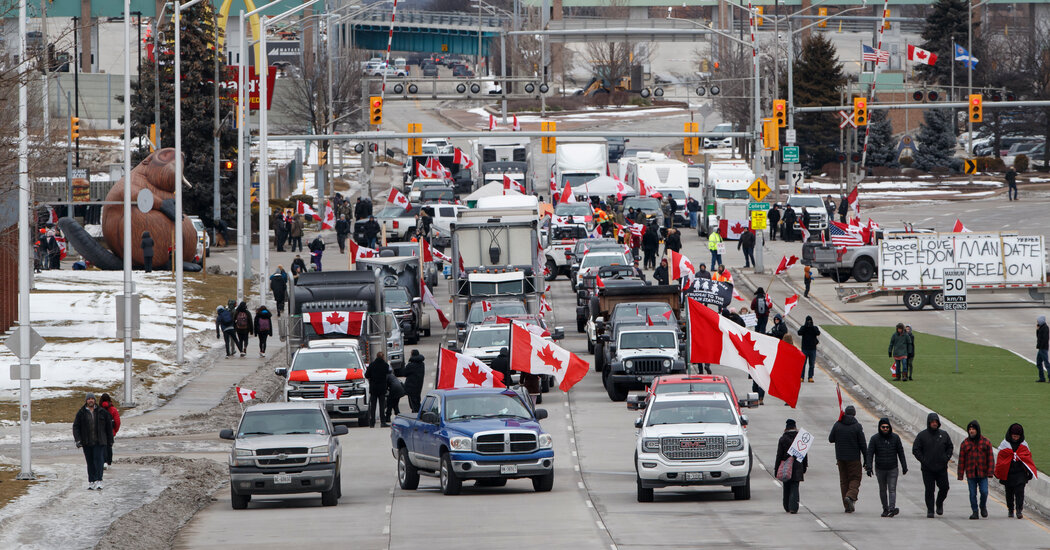 Doug Ford, the Premier of Ontario, declared a state of emergency for the entire province on Friday, as Ottawa police prepare for thousands of protesters to descend on the third consecutive weekend of a crisis that has disrupted international supply chains.

In Windsor, Ontario, along the border with the United States, Mayor Drew Dilkens is seeking a court order allowing him to evict protesters from the Ambassador Bridge, across which roughly a third of US trade States and Canada transit. Windsor City Council has authorized the city to seek an injunction “to end this unlawful occupation”, Mr Dilkens said, and a hearing is scheduled for Friday noon.

“Individuals on site are encroaching on municipal property,” he said Thursday, and if necessary “will be removed to allow the safe and efficient movement of goods across the border.”

The crisis took root two weeks ago, when loosely organized groups of truckers and others converged on Ottawa to protest vaccination requirements for truckers entering Canada from the United States. The protests, which include the blockade in Windsor as well as those at other points along the border, have turned into a wider battle cry, largely from right-wing groups, against pandemic restrictions and the Prime Minister Justin Trudeau.

Automakers have been particularly hard hit by the partial closure of the Ambassador Bridge, which connects Windsor and Detroit. Trucks cross it thousands of times a day carrying $300 million worth of goods, about a third of which are related to the automotive industry.

In Ottawa, the Canadian capital, the scene on Thursday resembled a noisy party, with hundreds of people milling between the cabins of giant trucks parked in the middle of the street. The song “Life Is a Highway” played through loudspeakers installed on an empty trailer transformed into a stage.

But the crowd had thinned somewhat, with empty spaces where the trucks had been the day before.

“Some guys had to go back to work, and the police wouldn’t let us fill those spots,” said Johnny Neufeld, 39, a long-haul trucker from Windsor.

The Teamsters union — which represents 15,000 long-haul truckers in Canada, but not usually those involved in the protests — denounced the blockade and called on protesters to end the disruptions, which have threatened thousands of jobs. The union said in a statement late Thursday that protesters continued to “harm workers and negatively impact our economy.”

The group has previously called on protesters to disperse, but to no avail.

On Thursday, the Ontario government obtained an order from the Superior Court of Justice prohibiting the distribution or use of donations collected for protesters through the Christian fundraising platform GiveSendGo, including more than 8.5 million dollars raised through a campaign called “Freedom Convoy 2022.”

Fundraising efforts had shifted there after GoFundMe halted fundraising campaigns for protesters. GiveSendGo, which is based in the United States, said late Thursday that it planned to defy the court order.

“Know this! Canada has absolutely no jurisdiction over how we manage our funds here at GiveSendGo,” he tweeted. “All funds from EVERY campaign on GiveSendGo go directly to the recipients of those campaigns, not the least of which is the Freedom Convoy campaign.”

The protests have caught the attention of far-right and anti-vaccine groups around the world, raising millions of dollars online and inspiring copycat protests in at least two countries, New Zealand and Australia.

In a briefing this week, Jen Psaki, the White House press secretary, said the blockade threatened the auto industry given the importance of the Ambassador Bridge as a conduit for vehicles and parts. She said the Biden administration is also monitoring potential disruptions to Michigan’s agricultural exports to Canada.

General Motors canceled two shifts Wednesday and Thursday at a Lansing, Mich., plant that makes sport-utility vehicles because the plant relies on components that normally cross the bridge. Ford Motor and Toyota have also shut down some operations because plants could not get parts made in Canada.

Mr. Trudeau ruled out sending the army; there are very few precedents for doing so in Canada, which has no provincial equivalents of a national guard. Late Thursday, he said he had convened an “incident response team” and informed Canada’s opposition parties of the situation.

“We will continue to work closely with municipal and provincial governments to end these lockdowns and ensure they have the resources they need,” Trudeau said. wrote on Twitter.

An increased police presence in Ottawa was apparent Thursday, with officers patrolling in groups of six to a dozen.

Some of the protesters have clearly been fringe, sporting Nazi symbols and desecrating public monuments. Others described themselves as ordinary Canadians driven by desperation.

Another protest could be planned for Sunday near the Super Bowl in Los Angeles, according to an internal Department of Homeland Security memo obtained by The New York Times.