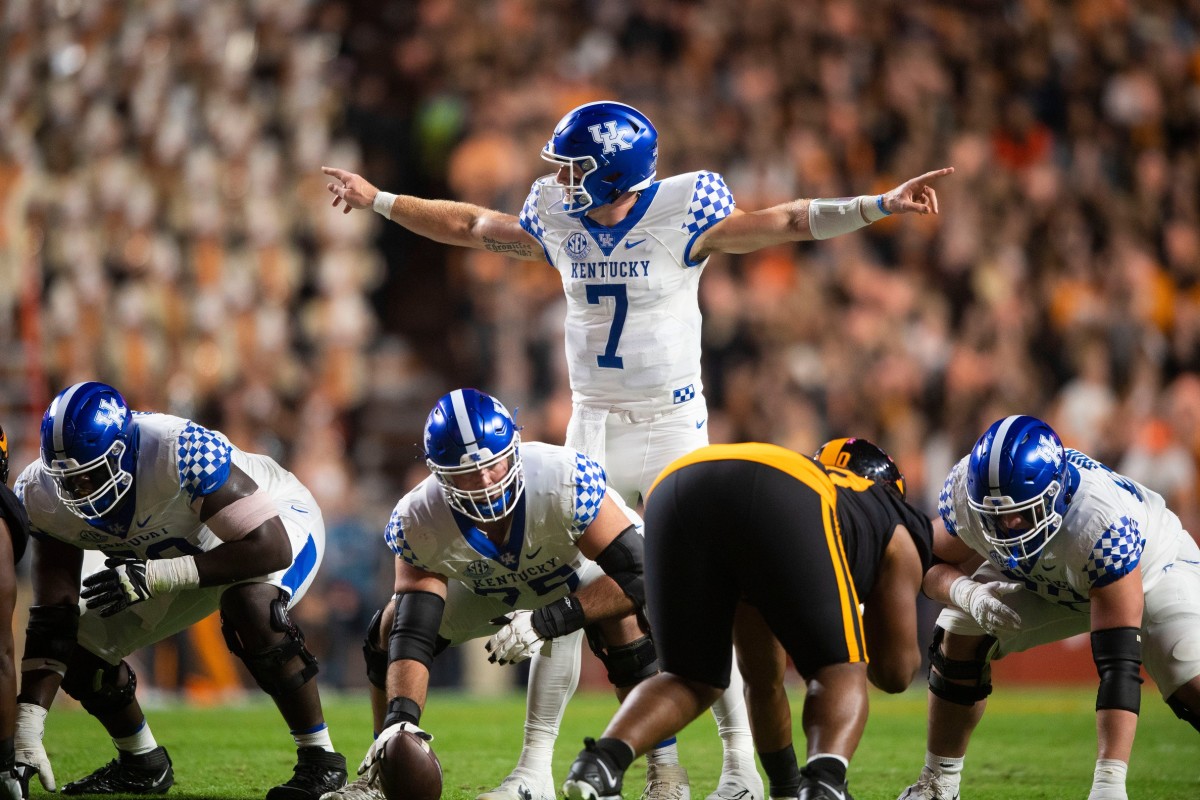 The season is in freefall for Kentucky (6-4, 3-4 SEC), but it has a final starting point this weekend, hosting the No. 1 Georgia Bulldogs (10-0, 7-0) at Kroger Field. With only two games left in the season, the Cats must try to make a good impression before the Governor’s Cup against Louisville.

Wildcats Today will have all your live gaming coverage here as the UK attempts to pull off the all-time upset. You can also follow editor Hunter Shelton on Twitter here.

Kentucky Drive Eight (2:32): The Wildcats try to move the ball down again, but time is running out.

Kentucky Drive Seven (6:55): Oh my… Barion Brown is not human. Levis throws another one deep, he carries it with a DB draped over him. Kentucky is in UGA territory. The game is 47 yards.

The fake pass ends up going to Jordan Dingle, but the ball is just a little too high, he can’t knock it down. Now 3rd and 10…Levis’ 3rd pass to Brown is complete for 11 yards, barely moving the chains. Kentucky’s offense is… to move football through the air!

The first sack of the night for the Bulldogs comes at a big point. Now 3rd and 12th for UK at UGA 20. Kirby Smart calls a timeout. 4h26 to do.

FIELD GOAL NOT GOOD: Ruffolo bricks it on the left, the line drive never had a chance.

Georgia Drive Seven: Big 3rd and 2nd place at UGA 41… This Kentucky defense continues to impress. McIntosh is stuffed at 3rd and runs, forcing the Bulldogs to punt. Kentucky will take over at their own 10, down 10 with 6:55 left in the game. I need to get something to happen fast on this drive.

Will Levis connects on a deep ball to Barion Brown, for a whopping 42 gain. Brown cooked the DB, a previous pitch would have been a touchdown. The next play is another first pass to Kattus.

Georgia Drive Six Suite: Fourth in UK 1, the Wildcat defense hold on, getting another huge save.

Georgia Drive Six: Jordan Wright came so close to skipping a pass from Stetson Bennett. Instead, a reception from Dominick Blaylock is worth 35 yards.

UGA pushing the ball down again, McIntosh runs for 23 yards, now a goal for the Bulldogs. END OF Q3

Kentucky Drive Five: Nothing to do for the cats. JuTahn McClain drops a pass on 3rd down, Kentucky to kick once more. The student section empties. We are approaching that time of night.

Kentucky Drive 4: Aaaaaaaand Kentucky goes three and out. Wilson Berry to come out from behind the end zone.

Berry’s punt looked pretty bad at first, but he had a great rebound, stopped at UGA 42. 53 yards from rookie RS.

Georgia Drive Four: McIntosh rips a nice run on the first play of the half, going for 13 yards. Three plays later, McIntosh fights his way to 3rd and 5th for another 1st down.

INTERCEPTION: Jordan Lovett awaits a deep ball from Stetson Bennett, carrying the turnover for the Wildcats.

Georgia Drive 3: Bennett’s pass is incomplete for Brock Bowers, he’s only got one catch for six yards so far.

Kenny McIntosh has just interrupted a 26-yard run to enter British territory. Some bad tackles from the Wildcats. UGA are 40 seconds behind, 2nd and 4 to UK 34. The Bulldogs still have one time out.

Bennett finishes at Bowers with just seconds left for a few more yards, with Podlesny out on his third down of the game.

Kentucky Drive 3: Kentucky makes three-and-out for the first time today. Wilson Berry heads to the Bulldogs with 2:07 to go until halftime.

McConkey catches the next pass for six yards, now at UK 27. He catches another pass two players later, moving the chains, making it the goal for the Bulldogs.

FIELD GOAL: Podlesny makes his second of the day, this one from 24 yards. The Wildcats are yet to allow a touchdown. Georgia 6, Kentucky 0 3:40 Q2

Kentucky Drive Two Suite: UGA gets to Will Levis for the first time today, but a hands-to-the-face penalty obliterates him, self-first down for Kentucky. It’s a big mistake. United Kingdom in UGA territory.

Levis runs six yards to the left on 1st down. Rodriguez makes his way for a 1st try on the next game.

3rd and 7th at UGA 24, Levis runs in the middle for the 1st down, but is injured. He is injured and remains on the sidelines. Kaiya Sheron in the game at QB.

Just seems to have been a dart for Levis, he’s back in the game.

2nd and 12, Rodriguez runs without gain. INTERCEPTION: Levis goes for the touchdown, but the pass is caught in the end zone by UGA’s Ringo. Levis is the one making the tackle on the return. Brutal.

The block in the back call was actually on Kentucky on the interception, which means UGA can open its second drive near 50.

Kentucky Drive Two: Dane Key with his first reception of the game, goes for 11 yards. Marginal warning addressed to UGA.

Another completion in Key, this time for 12 yards. Kentucky near 1950s.

The first screen of the day for Brown is wiped out, UGA’s Kamari Lassiter with the tackle. 3rd and 11, END OF Q1.

Georgia Drive One: Ladd McConkey with the first big play of the day for UGA, he takes a nine-yard backhand.

Bennett narrowly missed Darnell Washington, who was open on the sidelines, would have been a TD for the Dawgs. UGA just past the midfielder in his opening practice. Kenny McIntosh with a great run for another 1st down.

McIntosh goes for eight yards on his next run. Daijun Edwards gets nine on a run, Bulldogs quickly into the red zone.

3rd and 6 in the UK 10, Kentucky put pressure on Stetson Bennett, the defense is holding. Jack Podlenesy comes out to throw a chip shot.

Kentucky Drive One: Barion Brown couldn’t handle the opening kick, UK take over at the recovery spot. Opening at the 4 yard line…good start!

Barion Brown just had a hell of a hold on the 3rd and 9th UK 3. Back shoulder throw from Levis. Kentucky averts a one-start disaster.

Chris Rodriguez goes nine yards on 1st down, then fights for another on 2nd down to move the chains. Kentucky now in UK 45.

Note, Deondre Buford is at left tackle in place of Kenneth Horsey.

Josh Kattus catches a 13-yarder in the middle of Lévis. JuTahn McClain rushes for nine yards on the next play.

Levis missed Brown at 2nd and runs. McClain is stuffed in 3rd and 1st, followed by the same fate for Rodriguez, Kentucky overthrows him on the downs. Three straight games without a win, this UGA front line held strong enough. Fun opening practice ends with no points for the Cats.

Georgia has beaten Kentucky 12 games in a row, British head coach Mark Stoops has never beaten the Bulldogs. The last time the Wildcats won this game at Lexington was in 2006.

Linebackers Jacquez Jones and DeAndre Square are again out for the Cats. For a full injury report, click here.

Forecasts from our staff can be found here.