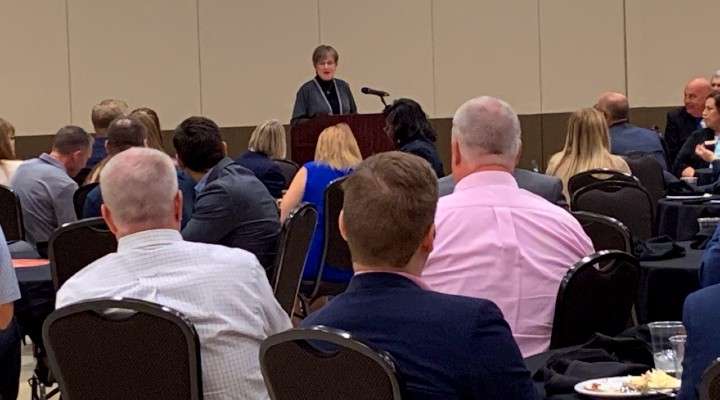 Kelly told those gathered that since taking office in January 2019, her administration has worked with private sector companies to create and retain more than 50,000 jobs.

“This is a milestone worth celebrating. Fifty thousand jobs means 50,000 opportunities for Kansans across the state to achieve their dreams and provide a better future for themselves and their families,” she said. “That’s on top of a 2.5% unemployment rate, one of the lowest in state history.”

Kelly said the jobs and unemployment rate, combined with record levels of new private sector investment “underscore the strength of the Kansas economy now and into the future.”

“Credit also goes to KEDA and other forward-thinking leaders here in Kansas who have made it their common goal to strengthen our state’s economic future,” Kelly said.

“I can’t thank you enough for your partnership and commitment to the success of our state,” she added.

Kelly also noted that Kansas has also become “a hot destination for companies looking for a new location to expand their business.”

“For the past two years, Kansas has won the prestigious Gold Shovel Award for excellence in attracting high-value capital projects that have created significant numbers of new jobs in our communities,” Kelly said. “And, Kansas won the Governor’s Cup for being the state with the most per capita economic development investment in the nation. Kansas is No. 1 right now!”

Kelly spoke about the biggest private sector investment in state history: Panasonic’s new $4 billion electric vehicle battery plant in DeSoto, which was announced in July. The facility will employ 4,000 workers and create another 4,000 permanent jobs with suppliers and community businesses, she said. In addition, 16,500 people will be hired for the construction phase.

“It’s resounding confirmation that we’re on the right track and our future is as bright as it’s ever been. Kansas is truly officially open for business,” Kelly said.

The “thriving business climate” is due to the state following its Growth Framework Plan which was launched in 2021.

“He addressed current and future trends in our state and created a roadmap for the development of several key Kansas industries, including aviation, agriculture, biotechnology and animal health,” he said. she declared.

Kelly said none of the state’s economic successes were possible without “the right people in place, adequate housing, quality child care and education.”

“We work hard to recruit and retain the skilled workforce Kansas needs to compete globally. The primary means we do to do this are expanding child care services and affordable housing. “, she said.

“This year, I signed a bipartisan bill expanding tax credits for businesses that provide employee child care, and announced that my administration is providing a total of $53 million to eligible child care staff at licensed facilities as a reward for their incredibly essential and hard work,” Kelly said.

“To lower the price of housing, I worked to secure more than $90 million in statewide housing funding and $100 million in incentives for communities to invest in the diversification and rehabilitation of housing. real estate,” she added.

Kelly noted that “without a strong education system in place, none of this is sustainable. That’s why I’m especially proud that we’ve achieved all of this while fully funding our schools.”