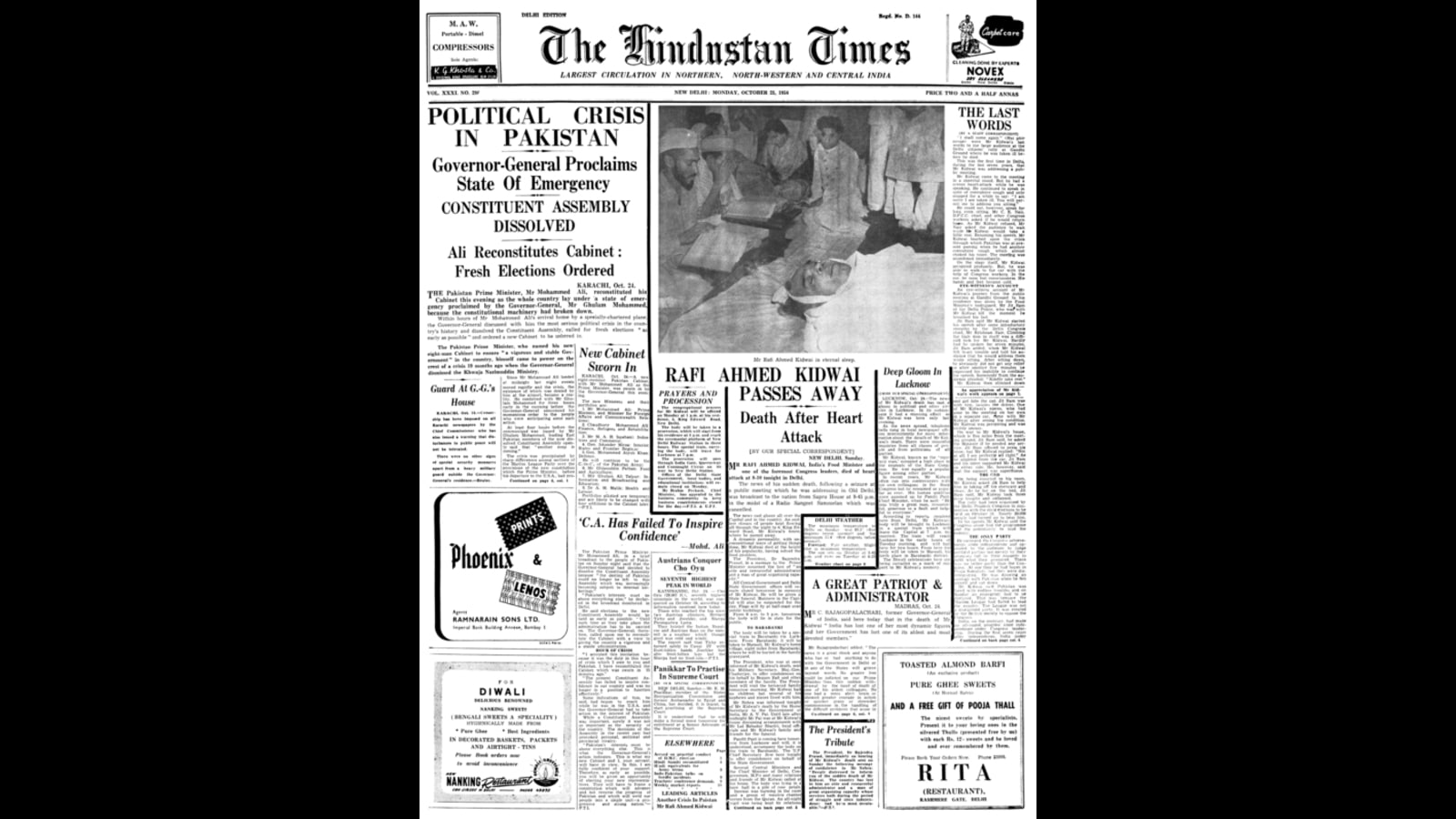 Karachi: Pakistani Prime Minister Mohammed Ali reconstituted his cabinet tonight as the whole country was under state of emergency declared by Governor General Ghulam Mohammed due to the collapse of the constitutional apparatus.

In the hours following the arrival of Mr. Mohammed Ali by a specially chartered plane, the Governor General discussed with him the most serious political crisis in the history of the country and dissolved the Constituent Assembly, called for new elections “as soon as possible” and ordered a new Cabinet to be inaugurated.

The Pakistani prime minister, who has appointed his new eight-man cabinet to ensure “a strong and stable government” in the country, himself came to power at the height of a crisis 19 months ago when the governor general sacked the Khwaja Nazimuddin ministry.

Since Mr. Mohammed Ali landed at midnight last night, events have accelerated and the crisis, which he denied at the airport, has become a reality. He conferred with Mr. Ghulam Mohammed for three hours early in the morning before the Governor General announced his momentous order to those who anticipated such action.

At least four hours before the release of the communiqué by Mr. Ghulam Mohammed, the main Pakistani members of the eastern part of the now dissolved Constituent Assembly openly declared that “another coup d’etat is coming”.

The crisis was precipitated by sharp differences between sections of the Muslim League Party over the provisions of the new constitution that the Prime Minister, before his departure for the United States, had promised the country before the end of the year. .

REQUEST FROM THE ZONAL FEDERATION

The “rebels” of West Pakistan, including Mr. Feroz Khan Noon, Chief Minister of Western Punjab, Mr. Daultana, Mr. MA Khuhro, Mr. Abdul Rashid, Chief Minister of Borders, and the Pakistani Minister of Interior , Mr. MA Gurmani, wanted a zonal federation for fear that East Bengal with more than half of the population of the country will dominate.

At a meeting in Lahore on Friday, the Punjab Muslim League Assembly Party mandated members of the West Punjab Constituent Assembly to demand that in Pakistan’s future constitution, only five subjects be defense, foreign affairs, currency and exchange, foreign trade and inter-zonal communications should be administered by the central government of Pakistan.

This mandate would have reflected the unanimous decisions taken by the senior leaders of the Muslim League Thursday after a week of talks between Mr. Feroz Khan Noon and Mr. Daulatana.

A majority of the Muslim League members of the Sindh Assembly, in a statement released yesterday, strongly opposed measures to form a zone federation for West Pakistan.

Another factor added to the crisis was the lifting last Wednesday by the Governor General of the disqualifications imposed under PRODA on four provincial ministers, including MM. MA Khuhro and Faziullah, allowing them to make a return to the political life of the country. .

A statement issued by the Cabinet Secretariat said: “The Governor General, after considering the political crisis facing the country, came with deep regret to the conclusion that the constitutional apparatus has collapsed. He therefore decided to declare a state of emergency throughout Pakistan. The Constituent Assembly, as it is currently constituted, has lost the confidence of the people and can no longer function. The ultimate authority rests with the people who will decide all questions, including constitutional questions, through representatives to be elected.

“The elections will take place as soon as possible. Until the elections are held, the country’s administration will be ensured by a reconstituted cabinet. He called on the Prime Minister to reform the Cabinet in order to endow the country with a vigorous and stable administration. The invitation has been accepted.

“The security and stability of the country are of paramount importance and all sectoral and provincial interests must be subordinated to the supreme national interest.”