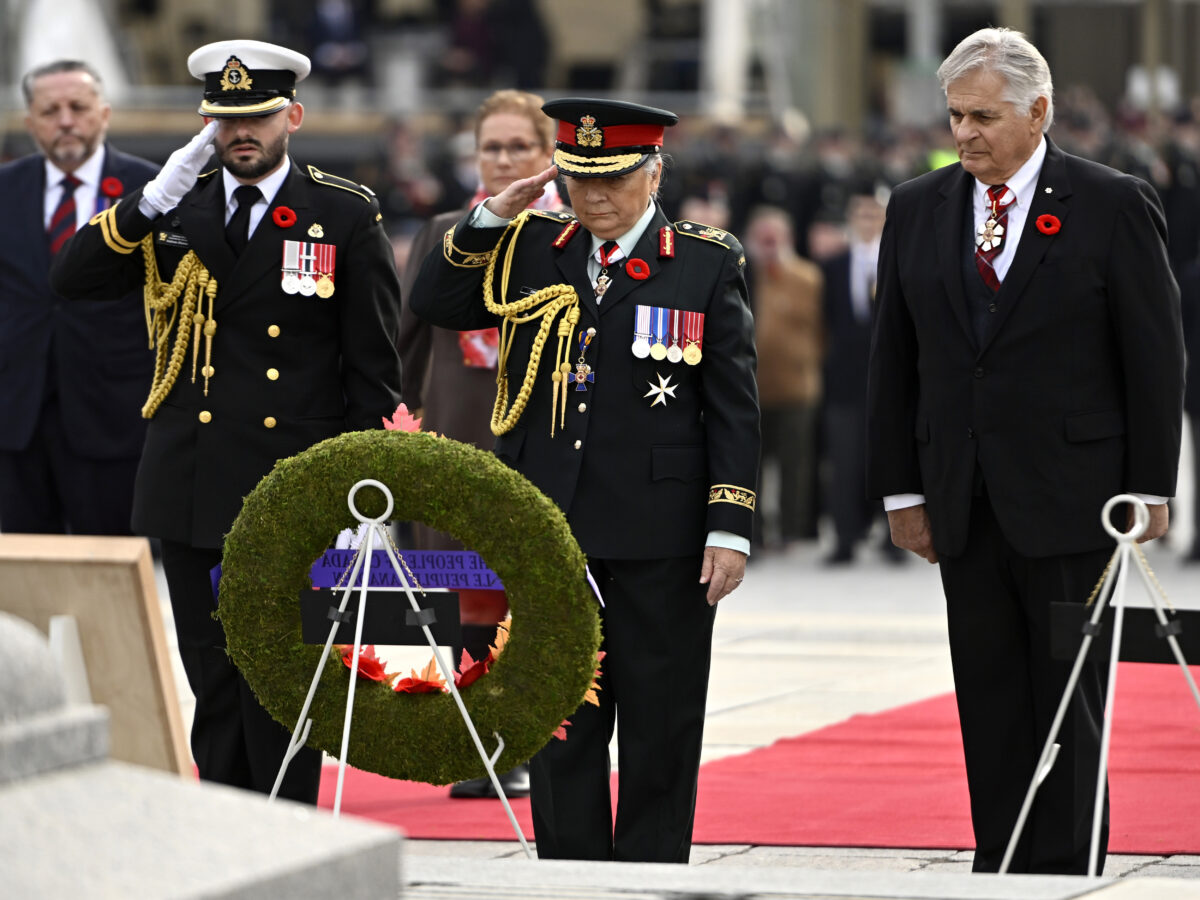 Governor General Mary Simon today urged young Canadians to learn from the sacrifices veterans and fallen soldiers have made in the past.

Simon participated in the National Remembrance Day Ceremony in Ottawa, where she laid a wreath on the National War Memorial near Parliament Hill and saluted Canadian veterans and service members as they marched in the annual ceremonial parade.

“I encourage everyone to listen and share the stories of bravery and heroism that each veteran carries,” Simon said in a Nov. 11 statement. “I urge young people in particular to put on the mantle of remembrance and learn how the sacrifice of veterans has changed the world.

Simon also paid tribute to the members of the Canadian Armed Forces (CAF), who she says are “dedicated to serving this country and protecting the values ​​we hold dear.”

“They do it with professionalism and an unparalleled sense of duty,” she said, adding, “We can do nothing less than support them and their families for all they do.”

Prime Minister Justin Trudeau did not attend the ceremony as he attends the ASEAN summit in Cambodia. Veterans Affairs Minister Lawrence MacAulay represented the government at the ceremony.

Trudeau issued a statement commemorating today Canada‘s fallen soldiers and veterans, saying they “stand up for our values ​​here, at home and around the world”.

“In hockey arenas, school gymnasiums, downtowns and retirement homes in communities across the country, we pledge to never forget the sacrifices Canadian Armed Forces members and our Veterans have made for us,” he said in the statement.

“Today the hearts of Canadians are heavy with solemn reflections,” he said in a statement. “Gathered around cenotaphs and war memorials, our heads bow in grief as we remember the thousands of Canadians who have fallen in the service of our country.

This year the remembrance memorial marks the 80th anniversary of the Dieppe Raid in France during World War II, in which more than 900 Canadians lost their lives.

Poilievre noted that this year’s memorial also marks the 105th anniversary of the Battle of Vimy Ridge and the Battle of Passchendaele, both of which took place during the First World War.

“On Remembrance Day, we are reminded that our freedom is not free. It was bought at full price,” Poilievre said.

“Canadian veterans and their families deserve better support. For too long, government after government has failed to meet the needs of veterans in Canada,” he said.

The CAF Chief of the Defense Staff, General Wayne Eyre, recently declared that the Canadian army is going through a manning “crisis” and he today called on Canadians to “be ready” to serve their country in the future.

“Our national prosperity is increasingly threatened. The country is going to call on you more and more in the future, so I ask you to be ready,” he said. World News.

Vice-Admiral Angus Topshee, Commander of the Royal Canadian Navy, also recently said there was an ongoing personnel “crisis” in the navy.

“We need more people. We need it as soon as possible,” he told The Canadian Press on September 21.

The Canadian Press contributed to this report.

Peter Wilson is a journalist based in Ontario, Canada.