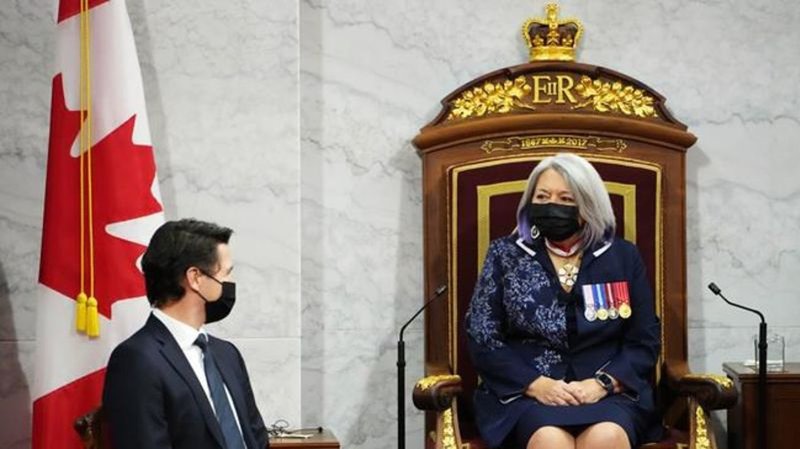 “We cannot hide from these findings. They open deep wounds, ”she said in French.

At the same time, she said there was hope.

“Reconciliation is not a one-off act and has no end date. It is a lifelong journey of healing, respect and understanding, ”she said.

Simon, who was born in Kangiqsualujjuaq, in the Nunavik region of northern Quebec, is a well-known advocate of Inuit culture and rights. She was president of Inuit Tapiriit Kanatami, a national Inuit advocacy organization. She has also served as Canadian Ambassador to Denmark and Canadian Ambassador for Circumpolar Affairs.

When she was appointed Governor General in June, she answered questions about her lack of fluency in French by saying she had been denied the chance to learn the language while attending day schools in Canada. federal government when she was a child.

Speeches from the Throne are written by the Prime Minister’s Office, but Governors General may add their own lines.

In the Speech from the Throne, the Liberal government promises to bring together all levels of government and aboriginal peoples to attract business to Canada.

He says the federal government will continue to respond to calls to action from the Truth and Reconciliation Commission, which has investigated the history and nefarious legacy of residential schools in Canada, by creating a national monument to honor survivors. He will also appoint a special interlocutor to seek justice on the Indian residential schools.

The government is also committed to working to address the issue of the separation of indigenous families through the child welfare system, while providing compensation for those harmed by these services.

The speech says the government will accelerate action in collaboration with Indigenous partners to address the national crisis of missing and murdered Indigenous women, girls and LGBTQ people.

He also says reconciliation requires a “whole-of-government” approach, breaking down barriers and creative strategies to speed up the work that needs to be done.

The government is also committed to helping fill the gaps that First Nations, Inuit and Métis communities continue to face, by mentioning long-term standing advisories on drinking water quality and by implementing the Declaration. of the United Nations on the rights of indigenous peoples.

This report by The Canadian Press was first published on November 23, 2021.

This story was produced with the financial assistance of Facebook and the Canadian Press News Fellowship.