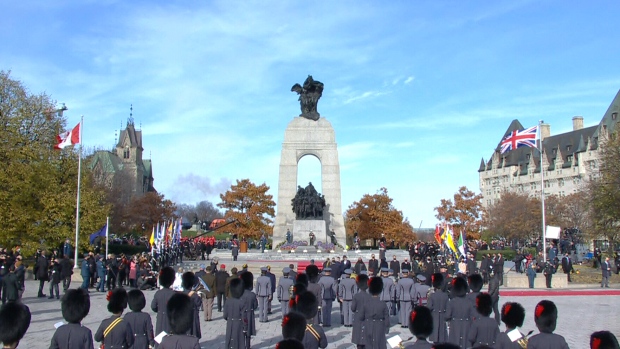 OTTAWA –
The Governor General, the Prime Minister and other Canadian leaders issued statements Thursday recognizing the courage of the women and men who have served and continue to serve the country.

Governor General Mary Simon, who attends Remembrance Day ceremonies at the National War Memorial alongside other dignitaries, said the day is a time of reflection.

“It is important to learn about the stories of soldiers, past and present. Although some stories may be difficult to hear, it is our responsibility to bear witness. Our hope is that by remembering the sacrifices of the past, we can envision a peaceful future. It depends on all of us. It’s in our hands. It is our duty to keep the memory alive, ”she wrote in a statement released Thursday.

The Ottawa ceremony is returning to a semblance of normalcy this year after being adjusted to reflect COVID-19 public health guidelines in 2020. Veterans and spectators have been urged to take to the streets.

Prime Minister Justin Trudeau and Sophie Grégoire Trudeau are also participating, as are the Ministers of Defense and Veterans Affairs.

“We stop to remember their brave sacrifices and recognize a debt we can never repay. We pay tribute to those who have lost their lives and to those who have been physically or mentally marked by their service, as well as to their families and loved ones, ”read a statement from Trudeau.

Over 2.3 million Canadians have served in uniform since Confederation.

“Through their selflessness, dedication and bravery, our military and police have stood up for freedom, peace and democracy – values ​​we hold dear in our hearts,” Trudeau said.

“Our veterans and those who serve today represent the best of what it means to be Canadian. Their selflessness and courage are an inspiration to all of us, ”he said.

“To show your gratitude, wear a poppy, attend your local cenotaph ceremony, and take a moment of silence to reflect and remind yourself that our country’s freedoms have come at a dear price.”

In his own statement, NDP Leader Jagmeet Singh recognized the day and criticized the federal government for what he called inaction to address the needs of veterans.

“We need to make sure that Canada’s veterans and their families are well supported. For too long the government has failed to meet the needs of veterans and it shows in the increase in homelessness and mental health issues among those who have served their country. Veterans deserve more than empty promises, ”he said.