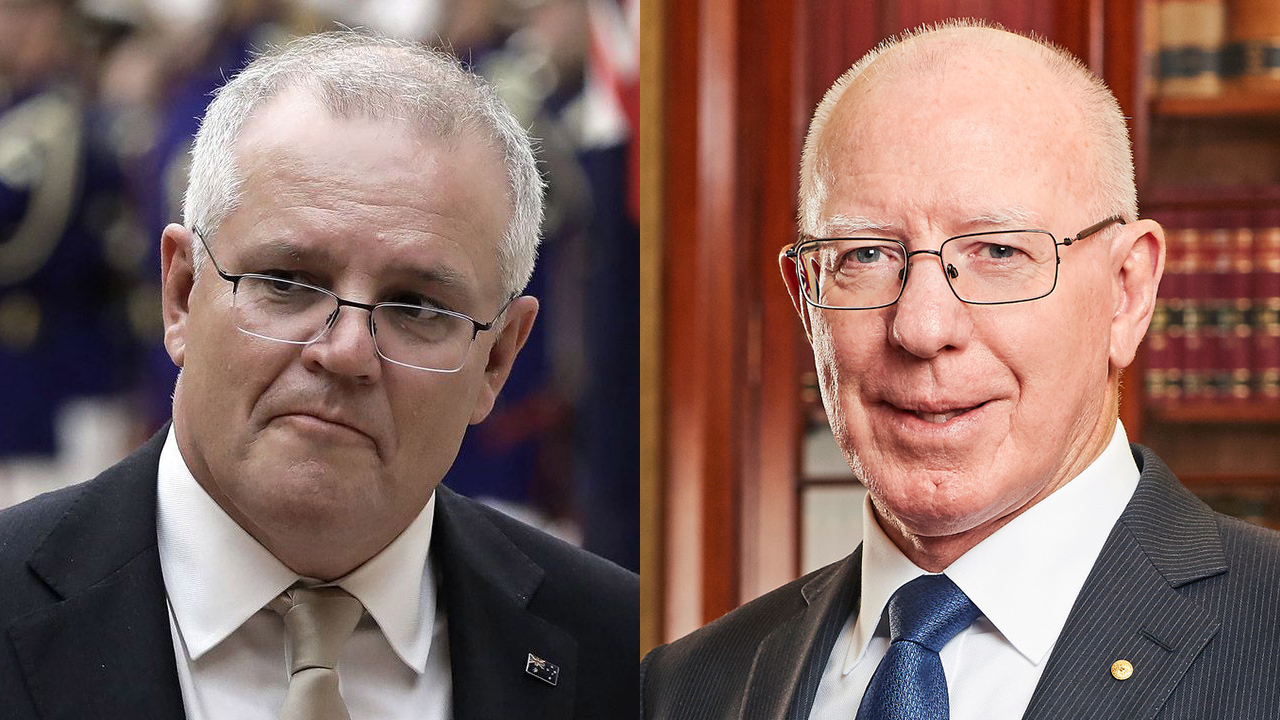 These belligerent attempts to justify the unprecedented concentration of vast, potentially dictatorial powers in the hands of the Prime Minister, entirely behind the backs of the people, must be a further warning of the willingness of the corporate, political and military intelligence establishment to move on with the facade of an increasingly tattered parliamentary framework in the face of health, economic and political crises.

Equally significant yesterday were the increasingly blatant efforts of the current Labor Prime Minister Anthony Albanese and his ministers – urged, supported and aided by the mainstream media – to cover up what the revelations of recent days have laid bare on the true workings of the capitalist state conspiracy behind the fig leaf of parliament. In particular, Albanese continued to absurdly portray these developments as merely the product of Morrison as an individual, while rushing to defend the Governor-General, whose own dictatorial “reserve powers” of the British monarchy have deployed in 1975 to remove an elected government, that of Gough Whitlam.

In fact, Albanese and Morrison are on a unit ticket to defend Hurley. Albanese said the Governor General was not at fault, while Morrison said Hurley had “acted with absolute propriety”. Yet it’s already apparent that Hurley knew his serial appointments of Morrison to one ministry after another were not announced to the public. Hurley’s role in this political crisis is doubly important because as a former Chief of Defense Force, like his Vice-Regal predecessor Sir Peter Cosgrove, he evidently had close ties at the highest level to the military and intelligence apparatus. and their partners in the United States. and United Kingdom. Hurley’s central involvement, as the Queen’s representative, in Morrison’s power buildup means that key figures in these networks, including in London and Washington, must have known about and supported these processes.

Alarm bells ringing in ruling capitalist circles over widespread public outrage at the revelations, and orders issued to end the fury as soon as possible, were voiced in yesterday’s newspaper Australian Financial Review editorial. He warned Albanese that his initial accusation of “trashing democracy” was “overblown”, as were calls to “kick Mr Morrison out of parliament”.

Yesterday’s statements from Morrison and Hurley raised many more questions than they supposedly answered. Obviously, what has been made public so far is just the tip of the iceberg.

The most glaring contradiction from Morrison’s press conference yesterday was his protest that he was under public pressure to take personal control of the pandemic response. However, all these movements have been hidden from the public! Moreover, as the toll of the pandemic shows, the main concern of Morrison’s government and that of state and territory governments was to limit security measures as much as politically possible, in defiance of popular demands, and then to act as quickly as possible to lift the restrictions in order to meet the demands of large companies.

Equally untenable was Morrison’s insistence that he had acted correctly because he did not personally use – or did not recall having used – any of the extraordinary powers granted to the ministers he supplanted, except to cancel the planned approval of an offshore oil exploration project. New South Wales coast ahead of the Federal Election on May 21 this year.

This is no more plausible than Morrison’s initial claim on Monday that he could not recall taking control of anything other than the health and finance portfolios, despite having immense powers over government spending, the police and intelligence agencies and the economy contained in the other three departments. which so far are known to have been taken over – the Treasury, Home Affairs and the combined Ministry of Industry, Science, Energy and Resources.

So does Morrison’s insistence that no one except certain officials in his premier’s department, Health Minister Greg Hunt, Governor General and Attorney General Christian Porter, and more later, Resources Minister Keith Pitt, was unaware of his secret ministerial appointments. .

Already, former deputy prime ministers Barnaby Joyce and Michael McCormack, and former finance minister Simon Birmingham have admitted knowledge that Morrison had taken control of certain portfolios. Claims by others, including then Defense Minister Peter Dutton, who is now Leader of the Opposition, and Albanese that they knew nothing at all are barely credible.

At the end of Morrison’s press conference yesterday he freely admitted to telling the two Murdoch media reporters writing the book plagued, Simon Benson and Geoff Chambers, about his appointments at the time. “This book was written based on interviews that were conducted at the time, in the middle of the storm,” he said.

This raises further questions about the role of Murdoch’s media, and perhaps other media organizations, in suppressing news of these moves over the past two and a half years, and then in the decision to make it public. now.

Hurley’s official statement yesterday was similarly full of holes. Like Morrison, the Governor General declared that he had acted entirely according to his duties. He said he “had no reason to believe the nominations would not be released” to the public. Yet it was clear from Morrison’s first appointment as health minister that no public announcements were to be made.

All records of the powers Morrison actually wielded and who knew about the arrangements must be released immediately to display the truth, along with correspondence between Morrison, the Governor-General, US and Australian intelligence agencies and the Labor leadership, as the WSWS raised yesterday.

Likewise, there must be the dismantling of the wall of silence maintained by the Labor government and the corporate media on the other damning revelation of recent days: that Morrison’s clandestine seizure of draconian powers, from the March 14, 2020, was preceded and linked to the sudden proclamation the day before of a novel and unconstitutional form of government – ​​a de facto coalition of Liberal-National and Labor heads of government in a “national cabinet”.

This so-called National Cabinet has no constitutional or statutory basis and is not responsible to any federal, state or territorial parliament. In fact, when the National Cabinet was formed, the willingness of the ruling class to dispense with the trappings of parliamentary democracy was demonstrated. Morrison’s government has said the federal parliament will be suspended for five months, and it has only met in reduced form for short sessions for most of 2020, despite the availability of video conferencing platforms.

The “insider” accounts in the book just published, plaguedabout the formation of the National Cabinet show that it was driven by the furious determination of Morrison and state and territory heads of government to block as much as possible of the recommendations made by the country’s health officials to limit the crowds and shut down urgently to stem the spread of the pandemic, which had already caused its first five deaths in Australia.

Health workers faced increasing public demands from doctors and other health professionals, as well as teachers and other workers, for immediate action to protect health and life. But Morrison and his state and territory counterparts were resisting any safety measures, no matter how necessary, that could affect corporate profits, either by shutting down sites or shuttering workplaces.

This is why all the leaders – the majority of the Labor Party – have insisted that the deliberations of the “National Cabinet” and its “sub-committee” of federal, state and territorial health chiefs must be bound by confidentiality requirements and protected freedom. requests for information. Morrison’s government rejected a request by Albanese, as then Leader of the Opposition, to join this body, but the Labor Party was represented by its Prime Ministers and State and Territory Heads of Government.

Albanese and the media are seeking to bury these facts because the Labor government has maintained the National Cabinet and all of its confidentiality arrangements for similar reasons – as a way to continue to impose the growing pandemic disaster focused on the ‘let it rip’ profit and the central agenda of the Labor government, which is to impose the deepest cuts in real wages against soaring inflation since the Great Depression of the 1930s, to cut social spending, to control gaping social inequalities and to intensify preparations to join an American war against China.

The very first set of powers Morrison sought to acquire in 2020 was that of Minister of Health under the draconian Biosafety Act. Once an emergency is declared under this 2015 legislation, the minister can issue far-reaching orders and impose “any requirement” on people, including movement restrictions.

As the WSWS warned during the proclamation of the National Cabinet, such measures, also taken under state and territory emergency laws, have not been used to protect the population, as governments claimed. . They have been applied arbitrarily and inconsistently, with various exceptions in favor of big business interests, and imposed via frequently amended ministerial decrees issued without any democratic input.

These measures, approved by the National Cabinet, set precedents which can and will be used by capitalist, Labor and Liberal-National governments, to bolster the police and military apparatus in an attempt to quell growing social discontent.

The working class must have a political voice, which the Australian ruling class seeks to stifle with this legislation.