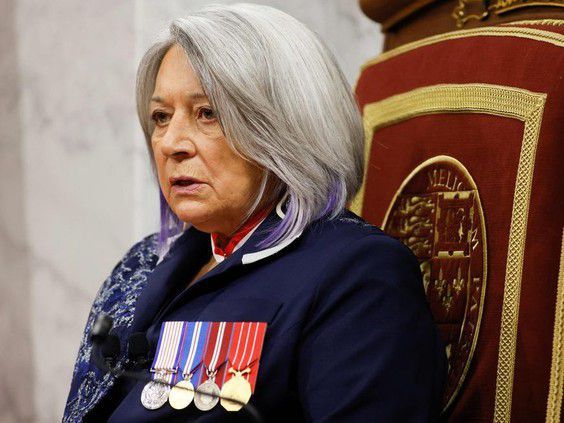 Stopping a wolf attack and a child abduction, and rescuing people from a burning mall are among the feats of courage that have earned five Calgarians bravery decorations from the Governor General of Canada.

A central Alberta woman also receives a Star of Courage for trying to stop a stabbing that took her life.

Sign up to receive daily news from the Calgary Herald, a division of Postmedia Network Inc.

A welcome email is on its way. If you don’t see it, please check your spam folder.

The next issue of Calgary Herald Headline News will soon be in your inbox.

Most of those recipients will receive honors from Governor General Mary Simons in Ottawa on Friday at a ceremony at Rideau Hall that will also mark the awards program’s 50th anniversary.

One of the two posthumous honors awarded will go to Hally Dubois of Lacombe, who died while trying to save a co-worker who was being stabbed by a co-worker at Berland Open Camp near Fox Creek on June 30, 2015.

“Ploring the assailant to stop, she climbed onto her back to avoid further injury, but was then attacked,” the quote reads, adding that she and the original victim died as a result of their injuries. wounds.

Dale Holloway of Okanagan Falls, BC also jumped into the fray and will receive a medal for bravery.

Dubois’ mother, Terry Lynn Stewart, will receive the honor for her daughter.

On August 9, 2019, Calgarian Russell Fee sprang into action at Rampart Creek Campground near Lake Louise after seeing a howling man being dragged by a wolf from a nearby tent.

“Charging towards the wolf, Mr. Fee kicked the animal hard until it released its grip on the victim,” the quote reads.

“As the wolf paced around the campsite, Mr Fee threw rocks at the animal and urged the victim’s family to run and hide in his van.”

It’s a hard thing to post, because I haven’t fully understood that it happened yet. Last night, while sleeping in our…

On Wednesday, Fee said the honor “is fine, it’s cool,” but that New Jersey’s Matt Rispoli who was attacked “could have taken it away if I had given him 10 more seconds.”

“There was no decision to be made – I was already running towards the wolf.”

While he managed to get the wolf out of Rispoli, it was his wife who ultimately chased the wolf into the forest after it “was on our campsite, sniffing out our children”.

When a fire broke out at the Urban Square shopping center in the 4500 block of Macleod Trail SE, Kaden Clouston, who was homeless at the time, was convinced people were trapped and unaware of the danger .

He entered the building to save people on an upper floor.

“By the time we got to the exit, the fire was three times bigger. . . I could see through the smoke, I was trying to cover my sleeve to breathe,” Clouston, 19, told Postmedia at the time.

At the same time, Mackenzie Terrance Vatter-Martineau lowered a woman from a balcony to safety with one arm while holding on to a railing with the other.

Both earned a medal of bravery for their heroism.

When Kimberly Cossette saw a woman trying to pull a child from her mother’s arms on a Calgary street on September 26, 2018, she stopped her car to help, forcing the attacker away.

When she told the mother to get into her vehicle, the attacker then turned on Cossette, who was helped by a passerby.

Like Cossette, Calgarian Margaret Bell will receive a medal of bravery, in her case for rescuing a drowning man in Glenmore Reservoir on August 1, 2017.

She was jogging along the shore when she spotted an empty boat and then a man struggling in the water.

“Without hesitation, she ran to shore and jumped into the water while reassuring the victim,” the quote reads.

“She swam about 50 meters in very cold, deep water to reach the man, who panicked and clung to her.”

Using her sweater, she pulled the man safely to shore.

Albertans are among 47 Canadians honored by the Governor General on Friday.