First poppy presented to the Governor General of Canada 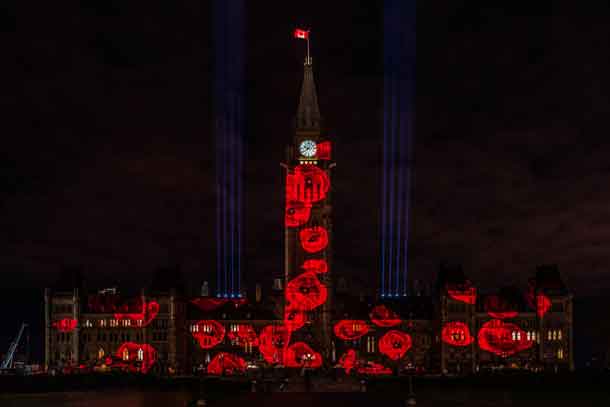 OTTAWA – The first poppy of the Royal Canadian Legion’s 2021 National Poppy Campaign was presented today to Her Excellency the Right Honorable Mary May Simon, Governor General and Commander-in-Chief of Canada. Due to the pandemic, a smaller but equally respectful ceremony was held at Rideau Hall in Ottawa, attended by several veterans and cadets.

His Excellency received the first poppy from the hands of the National President of the Legion, Bruce Julian. “Your example will be followed by millions of people in Canada and abroad,” he said.

The Governor General accepted the symbolic pin, reflecting her support and commitment to the Legion’s National Poppy Campaign and to our country’s veterans.

“Receiving the symbolic first poppy on the occasion of the 100th anniversary of the poppy is both an honor and a privilege,” she said. “I am grateful for the service rendered by members of the Canadian Armed Forces who fought for their country in perilous conflicts. May we always remember their courage and sacrifice. I am also grateful for the work the Royal Canadian Legion is doing to help veterans and promote Remembrance across the country.

His Excellency Whit Grant Fraser, husband of the Governor General, also received an inaugural poppy from the Grand President of the Legion, Vice-Admiral (Ret’d) Larry Murray, during the intimate ceremony.

“This year we mark the 100e anniversary of the poppy as a symbol of our nation’s remembrance, ”said Murray. The symbol was first adopted in 1921 by the Great War Veterans Association, the forerunner of the Legion, and carries deep meaning. “Her Excellency’s acceptance of this special symbol is a revered tradition,” he said.

As a symbol of the nation’s remembrance, the poppy represents fallen service members and RCMP veterans, and signifies our continued appreciation for their sacrifices.

About the Royal Canadian Legion

Founded in 1925, the Legion is the largest veteran community service and support organization in Canada. We are a not-for-profit organization with a national reach across Canada as well as branches in the United States and Europe. With 250,000 members, many of whom volunteer extraordinary time in their branches, our strength lies in our numbers.