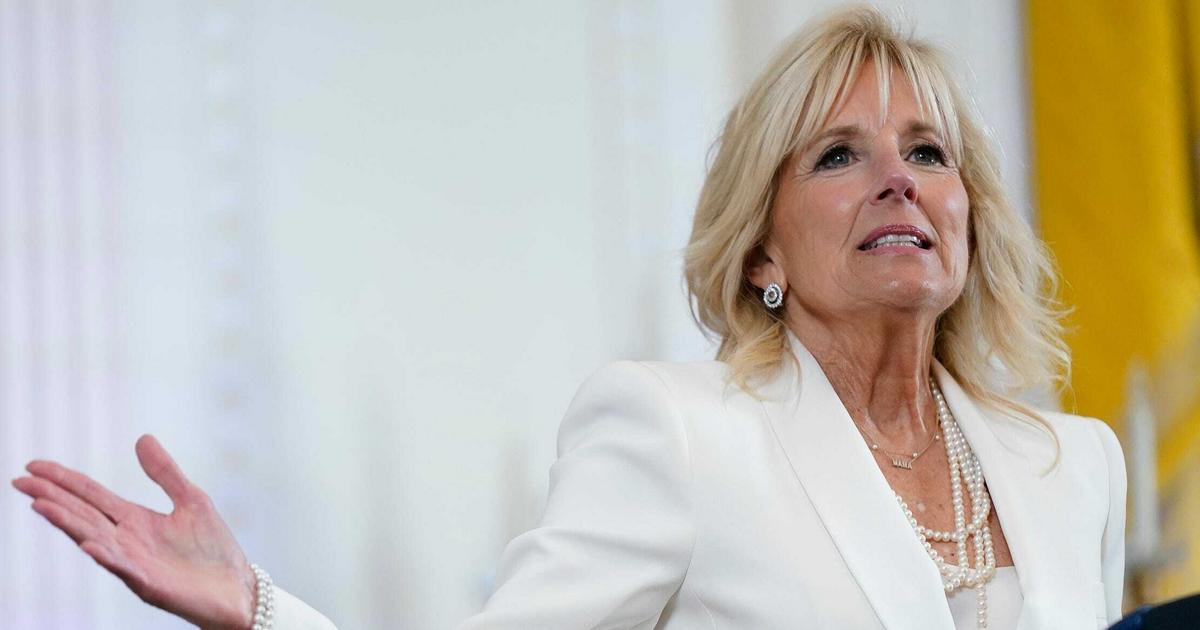 The first lady was promoting the Biden administration’s cancer initiative, which she called a “key pillar” of what President Joe Biden calls his “unity agenda.”

“Cancer has the power to change us, but it also connects us,” Jill Biden told an audience gathered in the ballroom of the Hilton West Palm Beach. “It forces us to look for answers to get help, to heal. It tears apart the things that divide us, reminding us that we have to fight this disease, not against each other.”

The remarks came as the Biden administration and Ron DeSantis continue to clash over numerous issues, including COVID-19 vaccination policies. Trump moved from his private club Mar-a-Lago in Bedminster, New Jersey, for the summer, but continues to make fun of Joe Biden in speeches.

But on Thursday, the first lady focused on an issue meant to cross partisan lines, as she broadly appealed for public support for cancer screening and treatment.

“The disease doesn’t care who you voted for,” said Jill Biden. “It’s not a red or blue problem. It’s an American problem. It’s a global problem. It will take all of us to end cancer as we know it.”

The trip aimed to highlight private sector collaborations. FoundCare receives help from the Promise Fund of Florida, which pays for cancer screenings and treatment for women who are uninsured or do not have adequate coverage to pay for their health care.

Joe Biden announced in February that he was reviving the Cancer Moonshot started under his former boss, then President Barack Obama. The goals of the initiative are to reduce the cancer death rate by at least half over the next 25 years and improve the lives of people with cancer and their families.

The disease is personal to the Bidens, who lost their son Beau to brain cancer in 2015. On Thursday, Jill Biden called their cancer work a “mission of our lives” for herself and the president.

Last year, Congress partially funded Joe Biden’s request for a new agency called the Advanced Research Projects Agency for Health, or ARPA-H, with the intention of authorizing more. The Biden administration has touted the agency as a way to fund ambitious and risky biomedical research that would aim to develop transformative new technologies, whether to cure cancer or Alzheimer’s disease.

“There’s nothing political about it,” Nancy Brinker, Republican and co-founder of The Promise Fund, told Insider in an interview. “I’ve always respected Dr. Biden. She’s wonderful, she’s as sincere as she can be and she gets things done and they both have caring hearts.”

Brinker served as United States Ambassador to Hungary from 2001 to 2003 and United States Chief of Protocol from 2007 until the end of the George W. Bush administration. Brinker also founded Susan G. Komen for the Cure, a nonprofit breast cancer research and advocacy organization.

The Promise Fund is set to receive a $1 million federal grant from Congress, and also received a grant from the state of Florida, which increased cancer research funding this year to $100 million.

Florida’s record funding increase was spurred in part by Florida First Lady Casey DeSantis, who underwent chemotherapy for breast cancer and was declared “cancer-free” in March. In another sign that the issue has bipartisan resonance, Casey DeSantis spoke about the importance of screenings and the Florida governor’s office hinted that a cancer messaging campaign is coming.

Jill Biden’s comments on Thursday were delivered as part of a two-day visit to Florida. On Friday, Jill Biden will attend a remembrance ceremony in Surfside, Florida, to mark the one-year anniversary of the Champlain Towers South collapse that killed 98 people.

A year ago, Ron DeSantis and Joe Biden showed bipartisan unity after the tragedy, with the governor calling the president “very supportive.” The governor’s office has yet to release the DeSantises’ schedule for Friday.