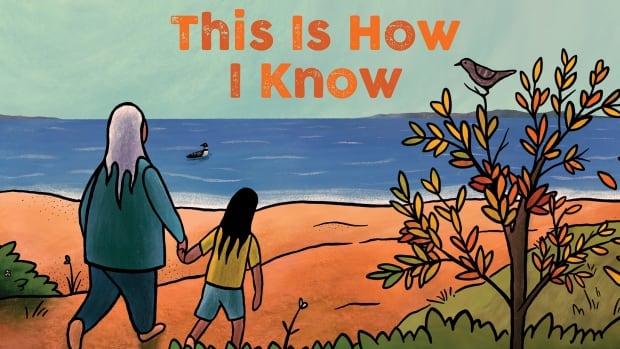 Brittany Luby hopes her children’s book – which was shortlisted for a 2021 Governor General’s Literary Award – will inspire young people to connect with loved ones and the natural world around them.

Mii maanda ezhi-gkendmaanh: This is how I know, written by Luby and illustrated by Joshua Mangeshig Pawis-Steckley, tells the story of an Anishinaabe child and his grandmother, and how they explore the seasons and the natural world.

Luby is an Associate Professor at the University of Guelph in Ontario and specializes in the history of Indigenous peoples. In 2020, she received the Governor General’s History Award for University Research.

Mii maanda ezhi-gkendmaanh: this is how I know is on the shortlist of illustrated books for children, one of the seven categories of the Governor General’s Literary Awards recognizing the best books in English and French.

“I also hope readers feel inspired to connect with their plant and animal teachers,” Luby said in an interview with CBC Kitchener-Waterloo. “I believe that the more moments we take to observe and connect with our environment, the more we feel nourished by it.”

Luby is the great-granddaughter of Chief Kawitaskung, an Anishinaabe chief who signed the Northwest Angle Treaty of 1873. According to Luby, her great-grandfather was sent to the Cecilia Jeffrey Indian Residential School in Kenora. , in Ontario, and since then the paternal generations have been mostly raised in English.

The book is written in English and translated into Anishinaabemowin by Alvin Ted Corbiere and Alan Corbiere, who are Anishinaabe and from the M’Chigeeng First Nation.

Luby said making the book available in both languages ​​is an important part of healing.

“I go from a confident English writer to a baby in Anishinaabemowin,” Luby said.

“I really hope that by creating bilingual resources with the support of incredible linguists, like the Corbières, my children and my children’s children will have a much easier time learning to speak Anishinaabemowin, to learn to speak as the members of our community. “

Use lived experiences as inspiration

Pawis-Steckley is an Ontario Ojibway multidisciplinary artist whose family is from the Wasauksing First Nation.

He said his own personal experiences with his family and grandmother were the basis of his inspiration for the illustrations in the book. He hopes non-native children learn the importance of reciprocal relationships between youth and elders.

Pawis-Steckley said recognizing the book as a finalist for one of the Governor General’s Awards helps Indigenous talent gain more national recognition.

“I feel like it’s so important for Aboriginal youth to see these kinds of books come out. So that they can see themselves in books, see them being represented … [to] to recognize that it was important for young Aboriginals.

A 1996 report of the Royal Commission on Aboriginal Peoples found that after the death in 1913 of Canadian poet Pauline Johnson, of mixed Mohawk and European descent, nearly six decades passed before another Aboriginal author is published in Canada.

In addition, according to the report, the majority of books on Indigenous peoples released each year by major Canadian publishers have been written by non-Indigenous authors, and Indigenous publishers have reported difficulties in securing support from government agencies that support the book. ‘editing.

Luby said the creation of the book was filled with Anishinaabe talent through editing, translation, illustration and writing, and she hopes more room will be made in the industry for projects of similar edition run by Aboriginal people.

“I really think this creation only helps pave a wider path for the next generation,” said Luby.

“I would really love to see more of an Indigenous presence throughout the publishing industry… just to see if we can expand even a bit further from the book and somehow incorporate Indigenous voices throughout the book. life cycle.”

Winners will be announced on November 17th

All the books shortlisted in the illustrated children’s book category are:

Finalists in all categories will be announced on November 17th.