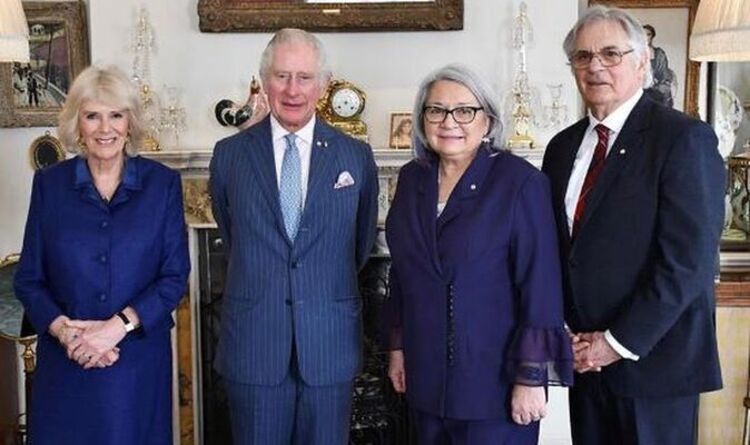 The Governor General of Canada met the Duke and Duchess of Cornwall in person on Tuesday at Clarence House, just a week after Prime Minister Justin Trudeau also held an audience with the Queen. The Queen hosted Ms Simon and her husband, Whit Fraser, for afternoon tea at Windsor Castle.

A photograph posted by a Twitter account for the Royal Family shows Ms Simon bowing and shaking hands with the world’s longest-serving monarch.

A statement released by Rideau Hall said Simon met with the Queen to share “the best wishes of Canadians in this year of Her Majesty’s Platinum Jubilee.”

Ms Simon said in the statement: “It was a great honor to meet Her Majesty Queen Elizabeth II earlier today.

“Our Queen is such an inspiration in these difficult times, and it was a privilege to share with her the Inuit concept of ajuinnata, meaning never giving up, which guides my work as Governor General.

It was Ms Simon’s second official meeting with the Queen and their first meeting in person.

The Governor General and Mr Fraser then met the Prince of Wales and the Duchess of Cornwall at Clarence House on Tuesday.

A Clarence House Twitter account posted a photo of Prince Charles and Camilla posing with the Canadian couple.

Another Instagram user, buch_liebe_62, wrote: “I am always impressed with the amount of work they do… one engagement after another! My deepest respect”

The Queen has resumed holding in-person meetings after it was announced on February 20 that she had tested positive for Covid-19.

Mr Trudeau met the Queen last week while in the UK to hold talks with Prime Minister Boris Johnson on Russia’s invasion of Ukraine.