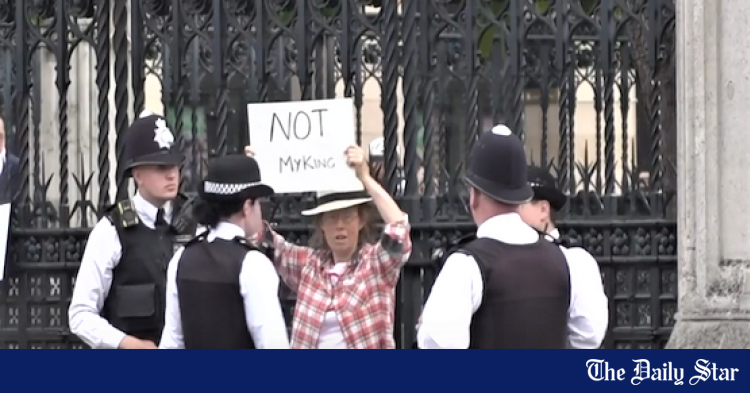 Free speech advocates have described the arrests of protesters following the death of Queen Elizabeth II as “deeply concerning”.

Two people have been charged in Scotland, while a man has been arrested and released in Oxford, reports the BBC.

For all the latest news, follow the Daily Star’s Google News channel.

The arrests took place at events commemorating the Queen’s death and announcing that King Charles III was Britain’s new king.

As queues for lying in the state formed in London, the Met Police said individuals “have the right to protest.

After the Duke of York was heckled during the Queen’s coffin procession in Edinburgh on Monday, a 22-year-old man was charged with breach of the peace.

Videos on social media showed a man shouting at Prince Andrew as he walked behind the hearse before being dragged to the ground by two bystanders, according to the report.

It comes after a 22-year-old woman was charged with breach of the peace during the king’s accession proclamation outside St. Giles Cathedral the day before, he added.

Both have been released and will appear in Edinburgh Sheriff Court later.

On the same day, Symon Hill (45) was arrested for disorderly conduct after shouting “Who elected him?” after another proclamation of accession to Oxford, the report also states.

According to Thames Valley Police, he was later arrested.

Ruth Smeeth, managing director of Index on Censorship, said the arrests were “deeply concerning”, adding: “We must guard against this event being used, by accident or design, to erode in any way let the freedom of expression of the citizens of this country enjoy.”

According to Silkie Carlo, director of Big Brother Watch, the police have “a responsibility to uphold people’s freedom to protest as much as they have a duty to allow people to show sympathy, grief or pay tribute”.

“The public has an absolute right to protest, and we have made that clear to all officers involved in the extraordinary police operation that is currently in place,” Assistant Deputy Commissioner Stuart Cundy said.

“We will have a safe event but we will put thousands of officers in there because of the level of security required and the millions of people who want to pay their respects,” said new Metropolitan Police Commissioner Sir Mark Rowley .

“More broadly, this is a moment of national sadness for the majority, the vast majority of the country,” the prime minister’s spokesman said, declining to comment on specific arrests.

“However, the fundamental freedom to demonstrate remains a pillar of our democracy,” the official added, the report concludes.