After Rushdie, can a decadent West really defend freedom of expression? 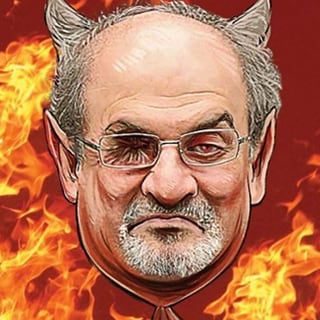 Iran’s state-run media is gloating over the loss of an eye for Salman Rushdie in the August 12 attack.

It’s been a busy summer for the Islamic Republic of Iran, amid reports that Iran is very close to a nuclear bomb and the West is very close to a nuclear deal with the regime in Tehran.[1] After months of speculation that the Biden administration intended to withdraw the designation of Iran’s Islamic Revolutionary Guard Corps (IRGC) as a Foreign Terrorist Organization (FTO), Biden’s Justice Department has charged an IRGC member with plotting to kill former national security adviser John Bolton and former Secretary of State Mike Pompeo.[2]

There was also a new plot to target prominent regime critic Masih Alinejad in Brooklyn with assassination (in 2021, the US government revealed a failed elaborate plot to kidnap and smuggle her to Iran via Venezuela). And on August 12, an American citizen of Lebanese Shia descent (whose Facebook page was filled with images and praise for the Iranian regime and its leaders) attempted to assassinate visiting British writer Salman Rushdie. of a notorious 1989 fatwa) by Ayatollah Ruhollah Khomeini calling for Rushdie’s murder for blasphemy. Contrary to the famous Iranian nuclear fatwa, the decision on Rushdi does exist.[3]

It’s early days, but it couldn’t have come at a worse time for Washington. The administration has spent much of the past two years relaxing pressure on Iran to pursue a new nuclear deal. Lax enforcement of sanctions earned Iran at least an additional $17 billion in 2021-22, a 77% increase from the previous year.[4] The Biden administration has also offered carrots to Iran’s proxies in Yemen and Lebanon, removing the former from the US terrorism list while seducing the latter with the possibility of new wealth from offshore natural gas deposits.

The Biden administration’s initial reaction to the Rushdie assassination attempt was muted. Nothing at first from the State Department (more than 48 hours after the attack, and unlike Sullivan and Biden, Secretary of State Blinken released a statement that even mentioned Iran[5]). The first statement from a senior official, National Security Advisor Sullivan, on the night of the attack was interesting – no mention of Iran, fatwa or Islamism, just that the attack was ” appalling”.[6] President Biden’s statement a day after the attack praised the victim but said nothing about the assailant or his possible motivation, and noted that Rushdie “stands for essential and universal ideals. Truth . Courage. Resilience. The ability to share ideas without fear. These are the cornerstones of any free and open society.”[7]

By contrast, French President Emmanuel Macron’s statement came a day earlier and was a little sharper, describing Rushdie as the embodiment of “the fight against obscurantism” and the victim of a “cowardly attack by the forces of hatred and barbarism” (some on the French right still criticize Macron for not using the words “radical Islamism”[8]). British Prime Minister Boris Johnson also reacted forcefully on the day of the attack – unlike old Biden.

In terms of the volume of online praise for the attack, much of it came from Pakistan, where blasphemy laws are a political bludgeon frequently used by Islamists. He also came from Lebanon and, of course, from Iran itself, where the official media were giddy with praise for him.[12] Iran’s official Fars news agency published an interview with a professor of theology at Shahed University in Tehran, stating that the murder of Salman Rushdie was not terrorism but a perfectly legal execution of an apostate.[13]

The West and the United States face several challenges in their response to this and other recent outrages, whether perpetrated by a “lone wolf” inspired by Iran or indirectly through Iran or one of its proxies like Hezbollah. The first challenge is the continued attempt to bribe Iran not to immediately go nuclear. To reward Iran today is to reward those who applaud the assassination attempt, who also call for its success and who assassinate free voices in the region like the Lebanese Lokman Slim and the Iraqi Hisham Al-Hashemi . It’s about rewarding Iran for its restraint on nuclear weapons while simultaneously funding improvements on ballistic missiles and drones, death squads and terrorist operations in the West.

The second challenge is even greater, if that were possible, than the risks and benefits of a new JCPOA nuclear deal. It’s an internal challenge with a West, particularly the United States, that seems to have lost its way when it comes to the “truth and ability to share ideas without fear” called for in Biden’s statement on Rushdie.

Freedom of speech in the United States and the West in general is on the decline, even from when Khomeini issued his fatwa more than 30 years ago.[14] Cancel culture has seen people lose their livelihoods over unpopular speeches or unwelcome remarks, and even certain gestures.[15] A 2021 poll found that 80% of American college students self-censor what they say, at least some of the time. A third – 33% – thought it was acceptable to use force to ban certain types of speech on campus.[16]

The US government and major social media companies seem to share a belief that certain types of speech – about COVID-19, about politics, about gender – must be strictly controlled, and that the “bad” people who spread “ misinformation” should be silenced (as Iran’s Supreme Leader has a Twitter account while former President Trump was silenced on Twitter, widely acclaimed by liberal voices[17]). Too often, it seems that freedom of expression is, in practice, seen as a “right-wing” cause rather than a national one.[18] And as the consensus on free speech declines among Americans, newcomers from abroad can only hasten that decline.[19]

This degradation of the space given to “offensive speech” means that the lines have blurred. Some religions and ethnicities seem to deserve more protection and respect than others. The United States is even freer than Western European countries, but the trend across the West is toward greater scrutiny, control, and punishment of offensive or unpopular speech.[20] The list of “phobias” to fight seems to grow inexorably.

Western rhetoric about freedom may still shine brightly after Rushdie’s attack. But following Charlie Hebdo and Samuel Paty and so many other cases, these are the voices of critics, mockers and reformers that end up being silenced in the West, and in time we will all self-censor ourselves in our societies, just like these American students .[21] As for Muslim reformers and heterodox thinkers in the West, the attack will have an inevitable chilling effect, while Iran’s Salafist and Islamist rivals will take courage and seek to attract the same attention.

The best revenge for the attack on Salman Rushdie is to ensure there is more freedom of speech in the West rather than less. This requires courageous Western leaders willing to go against the tide. Unfortunately, the trajectory – from college campus to social media platforms, from government to the corporate boardroom – has been headed in the wrong direction for some time now.