Principal journalist of the Tribune

FORMER Governor General and Deputy Prime Minister Arthur Dion Hanna, the ardent progressive whose faith in Bahamians helped push the Bahamas towards independence and sparked the era-defining policy of Bahamianization, has died at him yesterday at 93.

Mr Hanna, the father of longtime MP for Englerston Glenys Hanna Martin, was a nationalist whose views were instrumental in pushing former Prime Minister Sir Lynden Pindling to seek independence for the Bahamas at the end of the years 1960, according to University of the Bahamas historian Dr. Christopher Curry.

“He was a progressive thinker and he was one of the first to really galvanize the PLP to defend the cause of independence and when the Bahamas gained independence he was the one who promoted the policy of Bahamianization.” Dr Curry said last night.

“In the field of education this policy came about because we had a system based on British values ​​and beliefs and he felt there was a need for an overhaul of that system. He encouraged more Bahamians to be hired as teachers and so the concept of Bahamianization was really his idea, especially when it came to education.

PLP leader Philip “Brave” Davis described him as a lion.

“I am deeply moved on this occasion, saddened but empowered because I know the legacy he left us,” he said in a statement.

“He set the first rules to help the poor as Minister of Finance, through the social safety net which is now integrated into our department of social services. 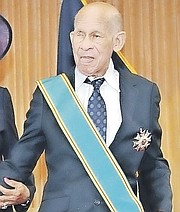 “It was Arthur Hanna, dedicated to wiping every tear from every eye, to building our country with our own hands. He mentored former Prime Minister Perry Christie and Hubert Ingraham when they joined the cabinet as young ministers. When others abandoned me at a difficult time in my political life, Arthur Hanna was my protector.

Prime Minister Dr Hubert Minnis said he remembered Mr Hanna “fighting for opportunities for Bahamians in all sectors of society” when he was a boy and noted that Mr Hanna “was a man of great humility who loved boating, fishing and farming.”

Former Prime Minister Hubert Ingraham said Mr. Hanna was a “great patriot of the Bahamas” who dedicated his life to the upliftment of ordinary Bahamians and national development.

“His fingerprints can be found on the most important policies that continue to be seen in government even today,” Ingraham said in a statement. “His name is synonymous with the Bahameization policies that successive Bahamian governments have pursued since 1967. Small in stature, AD was a giant.”

National Democratic Alliance leader Arinthia Komolafe said “generations of Bahamians will continue to live in the shade of the trees” he has planted.

Mr. Hanna was born in Pompey Bay, Acklins in 1928. He moved to New Providence and attended Government High School where he bonded with Sir Lynden Pindling. His wife, Beryl Hanna, died before him. He studied law in the UK and joined the Liberal Progressive Party after returning from his studies. He was Member of Parliament for Annes Town – now St Annes – from 1960 to 1992.

“Its ideology was based on ideas of social justice,” said Dr Curry.

“He would have been influenced by some of the ideas circulating around the world regarding liberalization theories, including the decolonization movement in the Caribbean and Africa and the civil rights movement in the United States. Having learned of these ideologies, he had his unique flavor on the Bahamian way of thinking. Interestingly, his death comes after the Emancipation Day holiday, as he was talking about freedom of justice for the oppressed and the idea that they should have rights. For so long, education was a privilege and not a right in this country and the Bahamianization policy had put an end to it.

Mr. Hanna was known for his great sense of humor. During his public career he could also display radical instincts and was at the forefront of a generation that was not afraid to challenge power in bold ways. During a debate over boundary changes in 1965, he was expelled from the House of Assembly and forcibly removed by the Sergeant-at-Arms, an event described as unprecedented at the time.

As a nationalist, he refused British honors and argued for a Bahamian honors system. “He had a real problem with any awards or titles bestowed on him by the Queen,” Dr Curry noted.

“He was a critic of the queen and the colonialists. He was a progressive thinker who wanted us to have our own national hero park.

During the time of the 1980s drug scandal, Mr Hanna resigned his post as Deputy Prime Minister, but never fled the PLP.

“The PLP at that time faced a lot of criticism of corruption and from what I understand it had a conclave in the Berry Islands and it asked Pindling questions and criticized him very openly and It was at that point that he resigned his post as Deputy Prime Minister, “said Dr Curry. “He always stayed in the PLP while Hubert Ingraham and Perry Christie left and ran as independents in ’87 and we all know what happened after that. He has always remained loyal to the party he started with despite his open criticism of Pindling. He was able to oppose on principle what he saw as rampant corruption in his own party. “