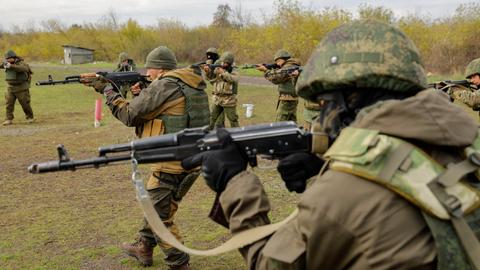 IMF member countries are issuing a near-unanimous call for Russia to end its aggression against Ukraine, calling the conflict – now in its 234th day – the main factor fueling inflation and slowing the economy. ‘Mondial economy.

The Russian Defense Ministry said two volunteer soldiers fired on other soldiers at a Russian military firing range near Ukraine, killing 11 people and wounding 15 others, before being killed.

The ministry said in a statement that the shooting took place in the Belgorod region. He said the two volunteers from an unnamed former Soviet nation fired at other soldiers during gunnery training and were killed by return fire.

The ministry called the incident a “terrorist” attack.

Bombing of a fuel depot in Russia

A fuel depot in the Russian region of Belgorod caught fire after a bombardment, said its governor, without specifying the origin of the bombardment.

“The emergency services are already fighting the fire. There is no danger of [the fire] spread,” Belgorod Region Governor Vyacheslav Gladkov said on social media, posting a photo of flames and black smoke rising into the air.

Russian border regions, including Belgorod, have accused Ukraine of attacking targets such as power lines and fuel stores since Moscow sent its armed forces to Ukraine.

“We must explain to our people that we must continue to support Ukraine militarily, economically, diplomatically because it is in our own interest,” Borrell told a meeting of the Party of European Socialists in Berlin, the German capital. .

The EU official said they must continue to supply arms to Ukraine “as much as necessary and for as long as necessary”.

World Bank: poverty in Ukraine has increased tenfold because of the war

Russia’s attacks on civilian infrastructure in Ukrainian towns far from the front lines will complicate the dire economic situation facing the country, which has already seen its poverty increase tenfold this year, a senior World Bank official said.

Arup Banerji, the World Bank’s regional director for Eastern Europe, said Ukraine’s rapid restoration of electricity after this week’s large-scale Russian attacks on energy facilities reflected the efficiency of the system in wartime, but that Russia’s change in tactics increased the risks.

“If this continues, the outlook will be much, much tougher,” he told Reuters in an interview.

“As winter really starts to bite…certainly by December or January, and if houses aren’t fixed…there may be another wave of internal migration, internally displaced people from the country.”

TRT World’s Obaida Hitto has the latest on Russian attacks on Ukraine pic.twitter.com/AOEq2LfnL1

Ukraine and Russia strive to gain advantage in annexed regions

Areas of southern Ukraine that Russia has annexed saw heavier fighting as Ukrainian soldiers waged a ground campaign to retake one, and Russian forces detonated long-range missiles and drones from Iranian manufacturing in another.

On Saturday, Ukrainian troops attempted to advance south along the banks of the Dnieper towards the regional capital, Kherson, but failed to gain ground, according to Kirill Stremousov, deputy head of the Moscow-backed administration in the region controlled by Russia. .

Volodymyr Zelenskyy says Russia is in an “atmosphere of despair” as Ukraine begins to rebuild what Russian rockets destroyed.

Meanwhile Vladimir Putin says he will hold off on further attacks as he investigates further explosions on his side of the border pic.twitter.com/it01utITeG

Mevlut Cavusoglu and his Ukrainian counterpart Dmytro Kuleba discussed the latest developments in the Russian-Ukrainian conflict in a phone call.

Ankara has played a crucial role in helping Ukraine resume grain exports while making multiple attempts to resolve the conflict.

Kyiv Region Governor Oleksiy Kuleba said the strike did not kill or injure anyone.

Volodymyr Zelenskyy says Russia is in an “atmosphere of despair” as Ukraine begins to rebuild what Russian rockets destroyed.

Meanwhile Vladimir Putin says he will hold off on further attacks as he investigates further explosions on his side of the border pic.twitter.com/it01utITeG

Russian forces carried out missile and drone attacks on the Ukrainian regions of Zaporizhzhia and Kharkiv, according to Ukrainian officials.

Oleksandr Starukh, head of the Zaporizhzhia regional state administration, said Russian forces attacked at night with S-300 missiles and Iranian-made drones. Energy infrastructure was damaged as a result of the attacks, Starukh added.

According to local media, explosions also took place in Kharkiv at night, while no casualties have yet been reported.

The first Russian soldiers to participate in a new joint force with Belarusian troops have arrived in Belarus, the Defense Ministry in Minsk announced.

The ministry added that the regional force’s mission was “exclusively to strengthen border protection and defence” after the deployment raised fears that Belarusian troops could join Russian forces in their offensive in Ukraine.

He accused Poland, Lithuania and Ukraine of training Belarusian radicals “to carry out sabotage, terrorist attacks and stage a military mutiny in the country”.

The United States will send an additional $725 million in military aid to Ukraine, the State Department and the Pentagon have announced.

This latest package includes more munitions for the HIMARS rocket system and brings total US military assistance to Ukraine to $18.3 billion since the start of Joe Biden’s administration, the Department of Defense said. in a separate press release.

The prime minister expressed the kingdom’s readiness to continue mediation efforts and support anything that contributes to de-escalation, SPA added.